The Internet of Things Vs. Not Having to Visit Tech Forums For Hours 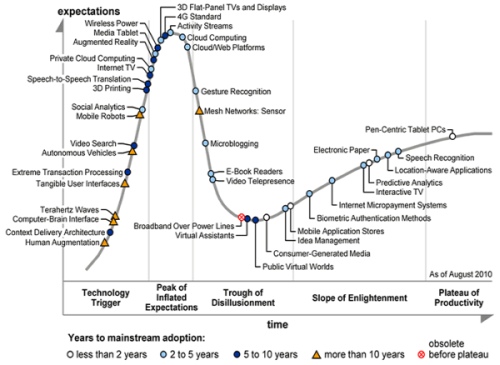 Gartner Inc is a technology research firm, and each year they put out an updated hype cycle analysis chart like the one above.

The “hype cycle” goes something like this:  when an exciting new technology comes along, at first there’s a lot of excitement.  People talk it up.  Early adopters jump on the bandwagon.  Market growth predictions get bandied about.  And the predictions are often rosy (after all, when you have a customer base of 6 for a techno-gizmo, it doesn’t take much to predict tripling or quadrupling that number). The technology reaches a peak of “inflated expectations.”

Then reality sets in.  Perhaps the technology isn’t mature enough.  Or perhaps infrastructure needed to deploy the technology is not in place yet.  Or perhaps the cost of manufacturing the technology needs to come down in price.  There could many reasons — but the end result is the same.  The initial excitement cools.  The technology enters the “trough of disillusionment.”  Sentiment becomes negative because the tech couldn’t live up to the inflated desires.

Some technologies never catch on, and fall by the wayside.  Some become obsolete, replaced by something better.

But in many cases all it takes is time for the pieces fall into place.  The technology then moves from the trough of disillusionment, back up eventually to the “plateau of productivity” — which is where the market understands where and how the technology really fits.  As the chart shows, sometimes it takes a decade or more for an emerging technology to move through the hype cycle and reach its true place in the market.

Early in the hype cycle is how I would describe something like the “Internet of Things.”  Right now we are going through the beginnings of “inflated expectations.”  However, it’s still so early we’re not even sure we all mean the same thing when we talk about an Internet of Things, where every “thing” is connected and emitting data to and from itself, and has a form of “intelligence.”  A lot has to happen before it meets it true potential.  As I wrote a few months ago, don’t hold your breath on the Internet of Things.

The Internet of Things is exciting in many ways.  But as small business owners we have to deal in reality.  And reality for most of us means the Internet of Things won’t impact our businesses to a significant degree for years to come.  I don’t know about you, but in my business we’re still grappling with how to get information to download from one software program to another, without having to hassle for hours poring through online tech boards for a clue as why we can’t get the import/export function to work.  When you’re dealing with that level of automation, it’s hard to care much about the refrigerator someday being intelligent enough to tell us it needs filled.  And as  the Economist Schumpeter columnist  notes, maybe there’s a simpler solution.  Maybe it’s easier to just open the refrigerator and look.

As Wikipedia notes, about the Internet of Things:  “Although the idea is simple, its application is difficult.”  Each person is surrounded by 1000 to 5000 objects.  For all those objects to be encoded and communicating, it would involve 50 to 100 trillion objects!

I love technology and what it does for my business.  But I’d rather focus on technology we can benefit from in the here and how, rather than something that may not be mature for 10 or who-knows-how-many years.