Women Entrepreneur Role Models: Who Would You Name?

In a recent study, blur Group surveyed more than 1000 national and international entrepreneurs about the top business people that inspire them the most.  Almost 10% of those surveyed were women. But when it came time to cast a ballot for the top entrepreneurs, women didn’t even receive 3% of the vote. 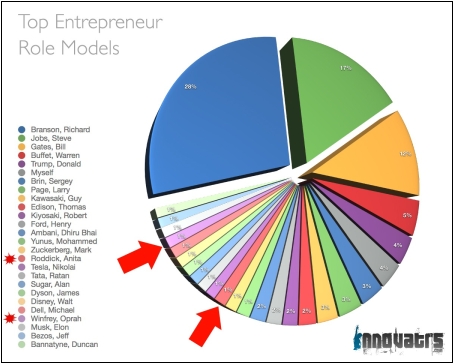 Richard Branson, British entrepreneur and Chairman of the Virgin Group, received 27.5% and topped the list for his creative ideas and ongoing innovation of new products.  And I agree, he is inspiring. But what about the ladies?  Is it an issue of out of sight, out of mind?

Maybe we just a need a little reminder.  So, here are 10 leading ladies to consider – including the two that made the list, Oprah and Roddick, and the tweet-able mention, Hashemi (she was “tweet-in” after the fact).

That’s my list, but there are quite a few women that are at the top of their game — billionaires, millionaires, and power houses in their industries. When you add inspiration to the mix, it seems to change things. After all, we are inspired by the stories that we know and that has a lot to do marketing and transparency.