Have We Lost a Generation of Small Business Owners?

We’re down more than 1.1 million. That’s how many fewer self-employed Americans there are today than when the Great Recession began.

The most severe losses have been among the one third of the self-employed who head corporations. As the figure below shows, back in December 2007 there were 589,000 more incorporated self-employed Americans than there are today, and back in June 2009, there were an additional 95,000. 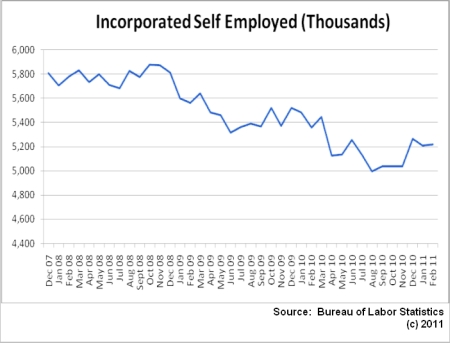 The recession and tepid recovery that has followed has eliminated 10.1 percent of the incorporated self-employed. To give you a sense of the magnitude of this loss, between December 2007 and February 2011, the total number of Americans with jobs declined by 5.6 percent on a non-seasonally adjusted basis.

As a result of the recent decline, the current level of incorporated self-employed is back to the level we had in April 2004, despite a significant increase in the population.

The staggering reduction in the particularly valuable incorporated form self-employment has me wondering, “How long it will take America to rebuild our stock of small business owners?”

Scott Shane is A. Malachi Mixon III, Professor of Entrepreneurial Studies at Case Western Reserve University. He is the author of nine books, including Fool's Gold: The Truth Behind Angel Investing in America ; Illusions of Entrepreneurship: and The Costly Myths that Entrepreneurs, Investors, and Policy Makers Live By.
22 Reactions
Subscribe
Follow @smallbiztrends
RSS LinkedIn Pinterest iTunes