In Killing Giants: 10 Strategies to Topple the Goliath in Your Industry, I wrote about how smart, nimble companies out-maneuver the giants they face – and how shifting the playing field is a core strategy for anyone fighting above their weight class.

Barnes & Noble’s decision to launch a new OS for its Nook e-reader that turns it into a fully functioning Android tablet is fascinating for several reasons. 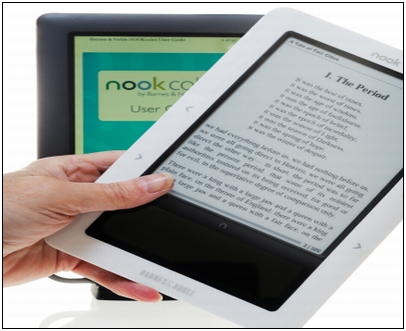 First, it was out there anyway. Hackers had rooted the device, Android Central reports, and were voiding their warranties left and right to download Android apps on it, so it was a “known known” a few short weeks after the device had launched in November.

Second, it changed the device’s playing field from also-ran into real contender in the blink of an eye (or an updating of an operating system, whichever comes first in your world), reports GadgetBox.

One minute, it’s an e-reader running a distant second in the e-reader market that costs twice as much as the market leader.

The next, it’s the most affordable Android tablet on the market. And look! You can download all those books!

In Killing Giants, I wrote about how Vibram shifted the playing field when they launched their Five Fingers athletic shoe. Faced with increasing commoditization from China, the company was actively looking for ways to innovate in a business that had limited possibilities – how many ways could you stamp a pattern on a rubber sole, anyway? But a graduate design student in Milan showed up with an outlandish prototype – a shoe with “fingers” for your toes – and the solution appeared. Today, the Five Fingers shoe is one of the hottest selling athletic shoes on the market and has spawned the “barefoot running” phenomenon.

How easy would it have been for the Vibram management team to dismiss this strange looking product?

What does this teach us?

#1. Inspiration almost always comes from elsewhere. The original hack of the Nook device, untethering it from the Barnes & Noble system, was unplanned. So was the arrival of the Five Fingers shoe. Both could easily have been dismissed. They weren’t. One has become a success story. Will the other?

#2. What we casually dismiss – or even ridicule – at first may be exactly the thing we need to study more closely. We ridicule things that don’t fit our preconceptions. And when we’re successful, it’s hard to admit to ourselves that we’re doing something wrong. That may be absolutely correct at this red hot second, but things can change pretty quickly, and soon the methods that won the last war will be hopelessly outdated. Take a second look while you can.

#3. Shift your perspective and look at your situation from a different angle. The Nook was “an expensive e-reader” compared to the Kindle – but “a pretty cheap Android tablet” compared to other tablet offerings. Ask yourself, “Compared to what?” and see how you can change your perspective – and your outlook. As Dr. Steven Feinberg, my partner at Decision Triggers, would say, “Practice tactical shifting!”

It’s a bit early to declare victory, but let’s celebrate the boldness of the move. Barnes & Noble is a company that deserves a bold move. When the platform is burning, times call for such decisions. By shifting from the narrowly defined e-reader world, where the Nook is an appendage of the bookseller’s electronic inventory, it now competes with all other Android tablets with a decided cost advantage – and it controls its own distribution through its well-known website and retail locations.

Is the Nook a Giant Killer? What have you ridiculed recently?

Stephen Denny is a competitive strategy and marketing consultant, speaker and author. His book, Killing Giants: 10 Strategies to Topple the Goliath In Your Industry is now available. You can follow Steve online at Stephen Denny, where he blogs about strategy, marketing and big ideas.
4 Reactions
Subscribe
Follow @smallbiztrends
RSS LinkedIn Pinterest iTunes