Teamly Review Is a New Way to Focus on Priority Tasks

Focus. We can talk about it all day, but it’s hard to do with the many things you face as a small business owner wearing too many hats. You can create a grand plan and fancy to-do list, but if you don’t focus on the important stuff and do it–well, then, it’s just a list. Teamly is a new type of task management tool–one that forces you to stay focused on priorities. 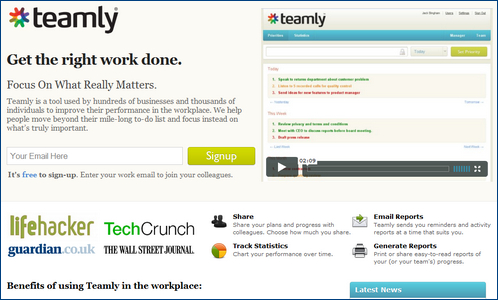 Teamly is an individual productivity tool, but it also serves as team performance management software. It has sharing and reporting aspects that make it useful for individuals, managers and directors (meaning those who manage multiple companies as an active angel or venture capitalist).

What I would have liked to see:

All in all, Teamly gives you a great ability to keep yourself focused. You don’t have to go any further than the basic dashboard to see what you’ve committed to do that day. They offer a free starter plan (ad-supported), but also have a special 3-month discount offer (good until June 30) that is only $2/user per month instead of the usual $8/user/month. It is so simple, elegant and useful that I had to make this a super-short post, so you could get right into it yourself and start focusing on priority one!

TJ McCue served as Technology/Product Review Editor for Small Business Trends for many years and now contributes on 3D technologies. He is currently traveling the USA on the 3DRV roadtrip and writes at the Refine Digital blog.
2 Reactions
Subscribe
Follow @smallbiztrends
RSS LinkedIn Pinterest iTunes