Chart of the Week: Job Loss in the Smallest Businesses

While they don’t get the attention of layoffs at giant corporations, job losses at the smallest businesses are a problem for policy makers. Each lost job is one that the economy needs to replace, regardless of the size of the businesses where people once worked.

This makes recent data from Intuit troubling. The Intuit Small Business Employment Index, which measures the number of people working at businesses with 19 or fewer positions that use Intuit’s payroll service, indicates that 1,362,000 fewer people work in companies of this size now than did so in the month before the recession began.

The good news is that these businesses are now creating jobs. Since February 2010, when the low point in post 2007 employment was reached, companies with fewer than 20 employees have added 624,000 positions.

The bad news is that these companies are less than a third of the way toward replacing the 1,986,000 jobs lost between November of 2007 and February of last year. Moreover, at the current pace of job creation, it will be January of 2014 before businesses with fewer than 20 workers again employ the number of people working for them in November 2007, just before the recession began.

To me this means that job creation is still a problem at the smallest companies. 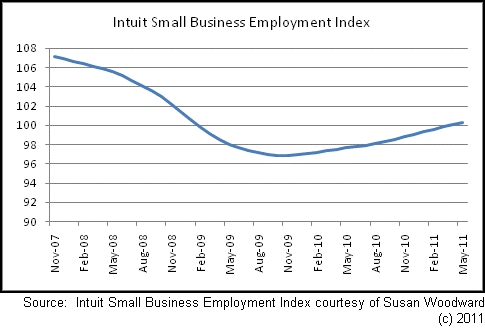