UPDATE AUGUST 6, 2011:  THIS GIVEAWAY IS NOW OVER.  THANK YOU TO ALL WHO PARTICIPATED.  WE HAVE 2 WINNERS IN OUR RANDOM DRAWING FOR THE PLAYBOOKS.  CONGRATULATIONS TO  @ChellyElite AND @inkscrblr — THE WINNERS!

Excitement for the Small Business Influencer awards is building.  We now have over 50,000 votes from the community — thanks to YOUR support.

And in honor of the great response, we’re giving away another two BlackBerry PlayBooks. The PlayBook is an exciting new compact tablet, and thanks to our premiere sponsor, BlackBerry, we have two 16 GB PlayBooks up for grabs.

About the BlackBerry PlayBook 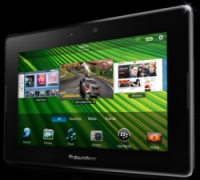 The PlayBook is BlackBerry’s new tablet, released just a few months ago. It is under a half-inch thick, and has a 7-inch display which CrackBerry.com says “is small enough to fit in many coat pockets, purses, handbags, etc., making it much more portable for out-of-the-home use than Apple’s iPad.”

If you’d like a shot at winning one of these hot new Playbooks, read on….

How Do I Enter the Playbook Drawing?

Who is Eligible to Win?

To qualify for the drawing, you must be located in the United States or in Canada. Sorry, we can’t send the PlayBooks anywhere else. Void where prohibited.

How Many Times Can I Enter?

Enter once a day. However, you can only win a maximum of one PlayBook.

When Will the Winners Be Announced?

How Will Winners Be Chosen?

It’s a random drawing. We’ll use Randomizer.org to choose from the Twitter tweets meeting the entry criteria.

Good luck, everyone — and thanks for your support of the Small Business Influencer 2011 awards! And thank you, BlackBerry, for sponsoring the awards!