Settled Into a Groove 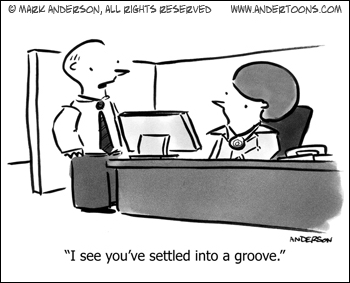 Those first few weeks when you start a new job are hard. You’re trying to learn names, fit in, feel out the culture and, oh yeah, learn your job.

It’s such a relief when you finally feel like you’re not just hanging on, but actually know what you’re doing. (Monotony sets in later, but that’s another cartoon. . .)

I remember coming home after a few weeks into a new position and telling my wife that I felt like l’d finally gotten into a groove, which I then modeled with my own particular brand of dance. The above cartoon wasn’t far behind. (Who says disco is dead?)