One of the legacies of the Great Depression has been a decline in small business cash flow. Despite the economic recovery that has been in place since June 2009, cash flow at small companies has not recovered to pre-recession levels.

Wells Fargo’s quarterly survey of just over 600 owners of small companies shows that in the fourth quarter of 2007, before the recession began, 62 percent of the owners reported that their business experienced “very good’ or “somewhat good” cash flow during the year prior and 72 percent indicated that they expected this level of cash flow over the coming 12 months. 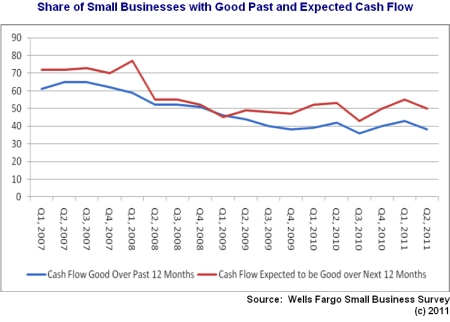 By the fourth quarter of 2009, nearly six months after the recovery had began, the share of small business owners reporting favorable cash flow over the prior year had dropped to 38 percent and the share projecting favorable figures over the coming 12 months had fallen to 47 percent. In the second quarter of 2011, these numbers were 38 and 50 percent, respectively, statistically indistinguishable from the lows reached since 2007.