Hmm, I guess social media, that place where people sign on to talk about your business, doesn’t count as “word of mouth marketing.” 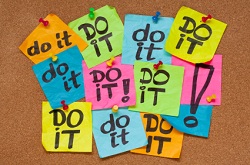 For those who do use social media, 19 percent say Facebook is their platform of choice, 15 percent prefer LinkedIn and just 4 percent are hooked on Twitter.

Buy why aren’t more business owners hopping on the social media bandwagon? When asked how they felt about social media, 24 percent said they simply didn’t have time to participate, while another 14 percent admitted they don’t know enough about it to get started.

That sound you just heard? That was my heart breaking.

While the education component acknowledges a natural learning curve, it is one that small business owners will need to overcome and tackle if they want to compete in the digital age. With more than 100 million users on LinkedIn, 500+ million users on Facebook and 200+ million users on Twitter, your audience is waiting for you to get involved. Your customers are on social media, which means you need to be, as well. And though the tools are new and can be intimidating until you find your legs, the core of social media isn’t much more than just talking to people. More specifically, social media is about talking to your customers. You need to make time to do that

And that really is the most important component – making time.

While speaking at the Hudson Valley 140 conference yesterday, I was asked how it is I have time to tweet and engage in social media, while still finding time to run a business. The answer is both easy and incredibly difficult:

I plan for it and I schedule it in my day.

I asked other small business owners (via Twitter) how they’re able to make it work, and their answers weren’t too different from my own:

Whether you realize it or not, social media is important to your small business. It’s giving you the opportunity to maximize the same word of mouth marketing that SMBs have relied on for years and that 50 percent of respondents said they couldn’t live without. It gives you the opportunity to grow bigger wings by making your brand more accessible, more visible and more authoritative simply by showing up and engaging. For SMBs who are often on a tight budget, the cost-effective tools associated with social media often provide an opportunity they can’t get elsewhere.

But that does take a time investment.

What do you think? Are you surprised that just 12 percent of SMB owners view social media as vital to their business? What social media tools do you most often rely on to do your SMB marketing? Conversely, what’s stopped you from getting involved in social media and what would make you change your mind?