Last year, the dollar value of angel investments increased 11.7 percent from a recent low of $18 billion (measured in 2010 dollars) the year before, according to analysis by University of New Hampshire’s Center for Venture Research (CVR). While this increase marks the first rise in angel dollars invested in real dollar terms since 2006, the amount put into companies in 2010 remains below that in every year from 2003 through 2007. In 2010, the amount invested by angels was only 5.6 percent higher in real dollar terms than that supplied in 2002. 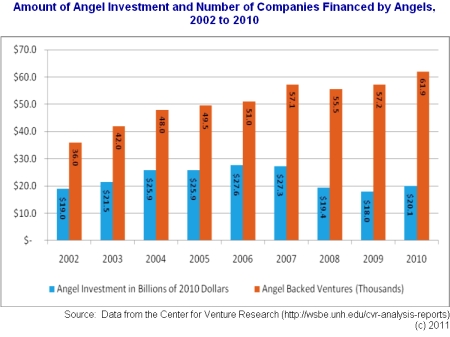 Why angels dropped the average size of their investments 38 percent in real dollar terms between 2002 and 2010 remains an important unanswered question. Any thoughts?

Source: Created from data from the Center for Venture Research.