Chart: Where People Want to Work for Themselves

People in some countries are more interested in self-employment than people in other nations. A 2009 survey funded by the European Commission queried over 25,000 randomly chosen individuals aged 15 and 64 in 36 nations about whether they would rather run their own business or work for someone else. The survey found that the fraction that would prefer self-employment ranged from 25.6 percent in Slovakia to 71.4 percent in China.

So where is America on the list? The U.S. had the fourth highest share of people who would rather be self-employed among the 36 nations investigated, coming in at 54.8 percent. 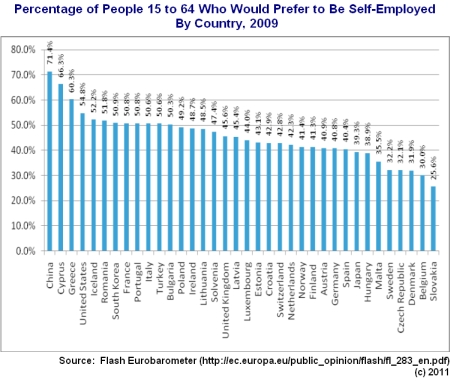 What do you think explains the differences across countries in people’s interest in self-employment? Is it national culture, the economic system, the political regime, or something else?