Venture Capital: No Longer a Business of Small Investments in Early Stage Companies

Venture capital is very different today than it was in the 1980’s when the industry experienced a wave of growth in response to changes in tax and pension laws. Back in the days when Apple Computer and Genentech were young start-ups, venture capitalists made smaller investments in earlier stage companies with less follow on funding than they do now.

Today it’s not surprising to hear that companies like Facebook or Groupon have raised over $350 million in a single venture capital round. But back in the early 1980s no companies were raising those amounts ($150 million back then in real dollar terms). 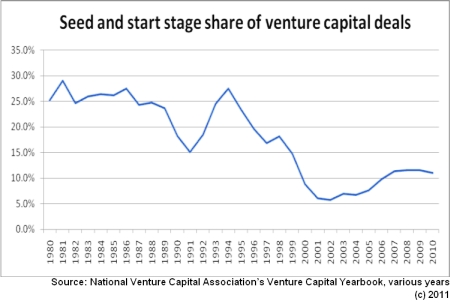 What led to this dramatic rise in the size of venture capital investment rounds? Two causes jump out from the data. The first is a sizeable increase in the amount of follow on funding provided by venture capitalists, which now dwarfs initial funding in a way that was not the case in earlier years. The NVCA data show that in 2010, venture capitalists made $4.10 in follow on investments for every dollar they initially invested in young, high growth companies. While this ratio is down slightly from its record in 2009, it remains far higher than it used to be. Before 2001, the ratio of follow on investment to initial funding had never even reached 3:1.

Although it once was, the venture capital industry is no longer about making small, early stage investments in high potential companies. Today venture capital is much more about larger, later stage deals involving much follow on financing.