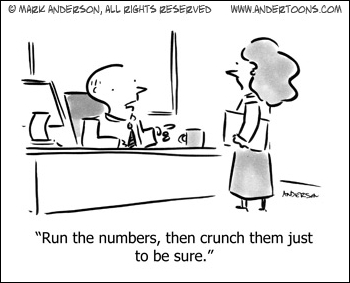 I love language. I love to play with it and twist it and make it do things that it wasn’t really intended to do.

I love, too, how it evolves and gives cartoonists new material to bat around. For example, before spreadsheets became commonplace, I’m fairly sure that “crunching the numbers,” if it existed at all, was a phrase used only by the slide rule elite. Normal people “ran the numbers.”

But then home computers and Lotus 1-2-3 hits and we’re all crunching numbers at a furious pace. So, one day while drawing an entirely different computer-themed cartoon, it made sense to me that people who grew up during computers’ ascendence might want to cover their bases numbers-wise.