Pwned: What Does It Mean? 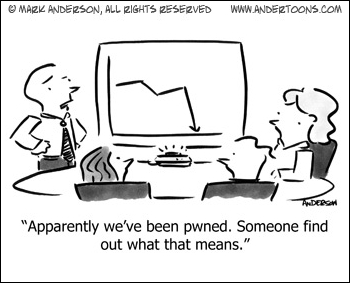 I, like most of my generation, am a gamer. Well, let me clarify that: I’m a casual gamer. I’ll take a few games of Dr. Mario or Peggle over a MMORPG any day.

Still, I’m online a lot, so I run across plenty of gaming culture and jargon. Take “pwned,” for example. It’s defined as:

A corruption of the word “Owned.” This originated in an online game called Warcraft, where a map designer misspelled “owned.” When the computer beat a player, it was supposed to say, so-and-so “has been owned.”  Instead, it said so-and-so “has been pwned.”

It basically means “to own” or to be dominated by an opponent or situation, especially by some god-like or computer-like force.  It’s a good word, and fun to play with, so I thought I’d put it into a business situation and see what happened.

That being said, I was terrified of messing it up and running afoul of some gamer mockery. Better to stick to Dr. Mario for me, I think.