Why Do Most Start Ups Fail? 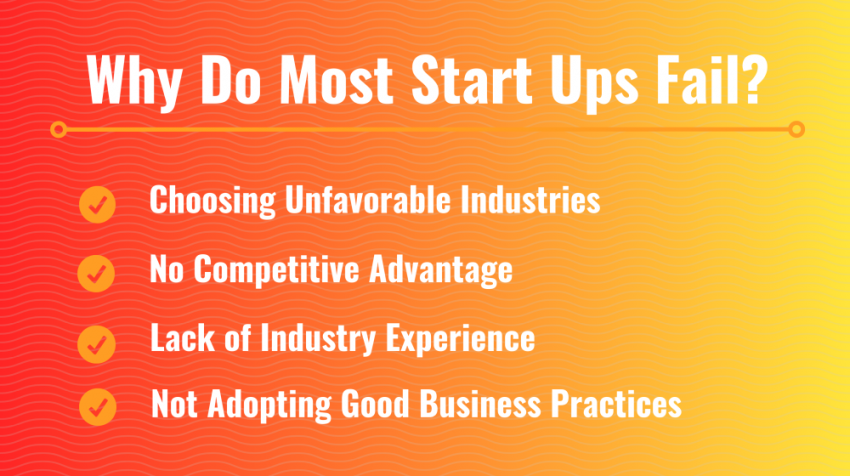 If you start a business, odds are that your company will fail. Data from the U.S. Small Business Administration shows that regardless of the year when they are founded, the majority of start-ups go out of business within five years, and two-thirds are no longer operating ten years after being formed.

I bring up this unfortunate statistic to discuss a topic that all entrepreneurs should consider. Why do most start-ups fail?

A lot has been written on this question, suggesting that maybe I don’t need to write about it too. But a recent article by Jay Goltz, got me thinking that some authors try to put too much of a positive spin on the causes of business failure. In his article, Jay wrote that “out-of-control growth” is one of the top ten reasons for small business failure.

Unfortunately, this argument doesn’t jive with the data. Not enough start-ups grow for too-rapid-growth to account for the failure of more than a handful of them. A study by Brian Headd and Bruce Kirchhoff found that only 28 percent of businesses with employees have any employment growth from one year to the next. And a paper written for the Small Business Administration (SBA) by Zoltan Acs and colleagues shows that only about 6 percent of U.S. companies have sales that at least double within four years – a minimum threshold for what might be called “rapid growth.”

If you want to know the real reasons startups fail, academic research suggests some more basic – and less flattering – reasons why so many start-ups fail.

Failure rates are high because a large number of inexperienced entrepreneurs start businesses that shouldn’t be founded in industries that are unfavorable to new companies.

Many entrepreneurs start companies that stand little chance of out-competing other businesses. Data from the Panel Study of Entrepreneurial Dynamics reveals that nearly 40 percent of the founders of new companies don’t think that their businesses have a competitive advantage. (Because entrepreneurs are an optimistic lot, if a business’s founders don’t think the company has a competitive advantage, what are the odds that it does?)

Not enough entrepreneurs have experience in the industries in which they are starting their businesses. Academic research shows that working in an industry for several years before starting a business enhances the survival prospects of start-up. Yet, a sizable fraction of entrepreneurs start businesses in industries in which they have no work experience.

Many entrepreneurs fail to take the actions that research shows help businesses to survive.

True, some start-ups fail because of factors beyond their founders’ control. But responsibility for much of the high failure rate of new businesses lies with the entrepreneurs themselves.

Scott Shane is A. Malachi Mixon III, Professor of Entrepreneurial Studies at Case Western Reserve University. He is the author of nine books, including Fool's Gold: The Truth Behind Angel Investing in America ; Illusions of Entrepreneurship: and The Costly Myths that Entrepreneurs, Investors, and Policy Makers Live By.
24 Reactions
Subscribe
Follow @smallbiztrends
RSS LinkedIn Pinterest iTunes