Universities and federal laboratories often license their inventions to industry as a way to commercialize those technical advances. Which generate higher royalties?

Recently released data from the National Institute of Standards and Technology (NIST) and the Association of University Technology Managers (AUTM) indicates that the average university invention brought in significantly more in licensing income than the average invention from a federal laboratory in 2009, the latest year for which data are available. 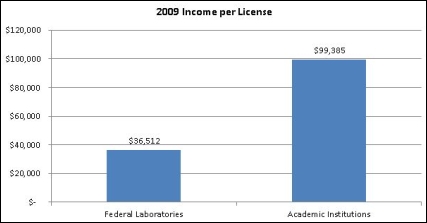 Of course a simple comparison like this doesn’t tell us why university inventions generate more royalties. Perhaps the average university invention has been licensed for longer, allowing it to generate more income. Maybe universities license more of their inventions to companies in industries that pay higher royalties. Perhaps university technology licensing officers drive better bargains than their counterparts in federal labs. Maybe the terms of university technology licensing agreements are different from those of federal labs.

I would not be surprised if all of these factors account for some of the difference in royalties earned by university and federal laboratory inventions. But I’m curious if readers know of others.