A recent safari in the Serengeti was supposed to get my mind off of work. I figured that being thousands of miles away from the office, with no connectivity or even a phone, I would be able to completely detach myself from any thoughts relating to business. 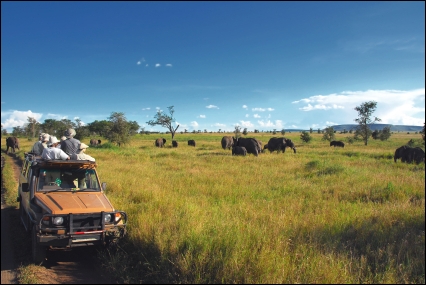 Instead, as I was watching wildebeests, lion, elephants and zebras in their natural habitat, I couldn’t help but be struck by how much of their behavior reflects the competitive nature of an entrepreneurial business.

I know this probably sounds crazy, but hear me out.

Watching these animals fighting for survival, I was struck by how they were able to not just survive, but thrive by using many of the same tactics that are used by successful businesses. Whether it was watching lions stalking their prey, zebras and wildebeests co-existing to each other’s benefit, or even watching a vulture patiently waiting for a zebra to die, there were strategies in place that would work for almost any business in the world.

Let me give you a few examples:

1. Strong and Decisive Leadership Is Essential to Success

In virtually every species I observed, leadership was in the hands (hooves, paws?) of an alpha male or group of alpha males.

While I am not advocating this kind of autocratic leadership in business, I saw compelling evidence of how strong, decisive leadership can work to the benefit of the whole team. Forgive the pun, but there’s a reason why CEOs get the lion’s share of the profits.

2. When Opportunity Presents Itself, Jump In

I had a chance to see a zebra that had survived a lion attack, but just barely. As it bled from a wound on its left rear quarters, a vulture dropped in and crouched on the ground, barely 10 feet from the zebra. The vulture waited patiently for the zebra to die, just sitting and staring. I didn’t see the end of this drama, but I have the distinct feeling that the vulture did not go home hungry.

While I’m not saying that entrepreneurs should be vultures, they should be ready to pounce on opportunities when they arise. Keep your eyes open, stay on top of your competition, and jump right in when you see a weakness to exploit.

3. Don’t Be Too Proud to Take the Leftovers From the Big Boys

Hyenas are often portrayed as one of the lowest forms of animals. They tend to follow prides of lions (at a safe distance) and get their sustenance by waiting for the scraps left behind after the lions are finished with the animals they kill.

There are dozens of other scavengers in the wild who rely on the scraps left behind by the animals higher up on the food chain.

As an entrepreneur, being a “scavenger” isn’t necessarily a bad thing. This is especially true when you are a service provider. You are going to have much larger competitors in your market, and they are going to get the bulk of the work from the largest clients. It’s a fact of life.

That doesn’t mean you can’t take advantage of opportunities presented when the big boys are satisfied. Big competitors often don’t want to be bothered by smaller projects, and big clients  always have smaller jobs they’ll give to smaller companies.

Entrepreneurs should see this as a chance to get your foot in the door. Take on the small project for the big client, do great work and you’ll find that the smaller projects will soon become bigger projects.

Difficult times are built in to the life cycle on the Serengeti. Every year there is a dry season which tests the survival instincts of every species. Difficult times make for hard choices. Lions have been known to eat their own young. Elephants will cover many miles in a day just to find a drink of water. Weak members of the herd who can’t keep up are left behind to die.

Just as many animals fail to survive dry spells, so do many businesses. For the resident wildlife of the Serengeti, survival is a matter of life and death. Entrepreneurs who succeed in difficult times survive because of a “life and death” mentality.

5. Don’t Let Anything Get in Your Way

A common site on the Serengeti is acres of trees that are snapped in half or simply knocked over. Perplexed by this sight, I asked our Masai guide what the reason was.

True to his word, he led us to a bend in the road where we could glimpse a herd of elephants coming in our direction. Because this was the tail end of the dry season, the elephants were in hot pursuit of water.

Nothing, I would soon see, would get in their way. Much larger than any elephants I had ever seen in a zoo, the males simply barreled through the trees, snapping them as if they were twigs. It was an awesome sight, but one that reminded me of the determination I had seen from many of the entrepreneurs I have known or worked with over the years. To get where you want to be, there are times you just have to push forward, having the confidence to knocking away obstacles as opposed to delicately sidestepping them.

One thing you learn about animals in the wild is that many species have natural partners. These partnerships (symbiotic relationships) work to the benefit of both species, playing a key role in their survival.

Any time you see a herd of zebras in the Serengeti, you are sure to find wildebeests close by. Why? The two groups work perfectly together. Both get their nutrition from grasses, but get it in very different ways. Zebras feed on tall grass, while the wildebeests eat short. The zebras clear away the tall grass for the wildebeests, which then munch on the shorter grass left behind.

Similarly, there are birds that get their sustenance by eating ticks found on larger, grazing animals. The larger animals are happy to be rid of the nuisance of the ticks, while the birds are happy for the meal.

As any entrepreneur knows, there will always be times when you need to rely on outside expertise to advance your business goals. While nature has chosen the “business partners” for the zebras, entrepreneurs have to be smart in choosing the service providers and consultants that work with their businesses. A great partner can be worth their weight in gold. A lousy one can damage or even destroy your business.

On the seventh morning of the safari, I had a chance to witness a large pond teeming with hippopotamus and another pond with just two hippos basking in a corner. Our Masai guide explained that the large pond was filled with a handful of alpha males and dozens of females, while the other pond was populated by two “loser males.”

The loser males had proved unable to protect the group and offered little in the way of getting food or procreating. As a result, they were forcibly banished.

Most every business, at one time or another, will have a few “losers” on staff. They don’t contribute, are usually unhappy, and are bad for the overall morale and performance of the company. While firing employees is one of the hardest things for an entrepreneur to do, failing to remove a bad employee is bad business.

Survival in the Serengeti is a daily battle. Animals fight for sustenance, for power and for their very lives. In the wild, merely living to face another day is a victory.

In business, of course, survival has a very different meaning. But the tactics for surviving in the Serengeti can provide real lessons for those of us trying to keep our businesses not only afloat, but thriving.

Jon Gelberg is a Principal at The Dilenschneider Group, a strategic communications and public relations agency in New York City. As a journalist, Jon has won more than 20 national, state and regional journalism awards and has been honored by the Associated Press Sports Editors, Professional Football Writers of America, The Society of Professional Journalists and many other organizations.
5 Reactions
Subscribe
Follow @smallbiztrends
RSS LinkedIn Pinterest iTunes