With the Passing of Steve Jobs, America Longs for the Next Innovator-in-Chief

President Obama’s $447 billion jobs bill hit a roadblock as Senate Republicans led the vote against the measure. The proposal would enact a 50 percent payroll tax cut, create an “infrastructure bank” to fund construction projects, and fund job-training initiatives for returning veterans. While some elements of the bill are agreeable to Republicans, many of them take exception to the plan to levy a 5.6 percent surtax on incomes of $1 million or more. 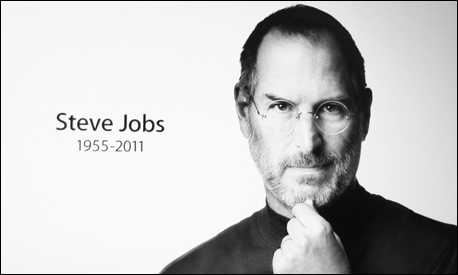 The President has made job creation a priority, as well he should. The economy has been stagnant for most of his term, and unemployment is higher now than in January 2009, when Mr. Obama took office. He knows well that small businesses are the drivers of job creation and that if they are not successful there will be little growth in the economy.

If nothing else, the sheer process of elimination forces his hand. At a time when the electorate is demanding smaller government and reduced spending, there is little chance of creating large numbers of public sector jobs. Corporations have weathered the recession by becoming leaner and meaner. They increased productivity and then were rewarded with strong profits. Large companies are doing more with less, so don’t look for corporate America to make lots of new hires. That leaves small companies as the remaining option for job creation.

Historically, this has always been the case. America is an entrepreneurial country and will continue to be so. We don’t know who will replace Steve Jobs as the country’s “Innovator-in-Chief,” but someone — perhaps in a garage in California or at a home office in New York — is today laying the groundwork for the next great American company.

Technology makes it easier to start a company than ever before. There is no shortage of people wanting to work, and believe it or not, there are financial institutions wanting to lend. While big banks are rejecting more than 90 percent of small business loan requests, increasingly, local banks and alternative lenders, such as credit unions and microlenders, are filling the void. These institutions are more than four times as likely to approve small business loan requests as big banks are.

It may very well be that the next Google, Starbucks or Apple will be funded by an SBA loan from a local bank, a credit union, or a microlender such as ACCION, which offers business loans up to $50,000 to empower business owners with access to working capital and financial education.

Small business development is the most likely route to economic growth. The President and many economists are banking on it.

Rohit Arora, CEO and Co-founder of Biz2Credit, is one of the country's leading experts in small business finance. Since its founding in 2007, Biz2Credit has arranged $800M in small business loans and has helped thousands of entrepreneurs. Rohit was named Crain's NY Business "Entrepreneur of the Year 2011."
2 Reactions
Leave a Reply Cancel reply
Subscribe
Follow @smallbiztrends
RSS LinkedIn Pinterest iTunes