Where the Heck Is Twitter’s Activity Tab?

For a site that thrives on being in the moment, Twitter is taking its sweet time to fully roll out its new Activity tab feature. The new feature was first launched nearly two months ago to immediately alert you to the Retweets, Favorites and Follows of your Twitter pals. 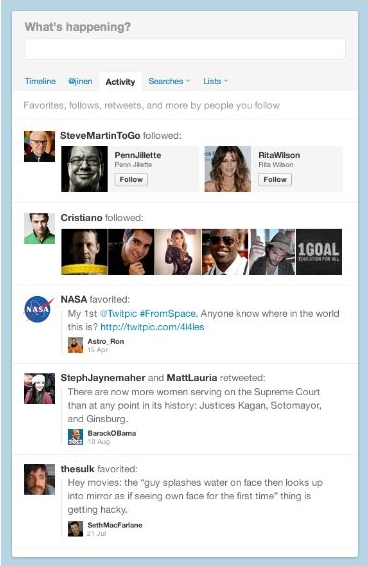 Simply put, the Activity tab gives you the lowdown on what the people you follow are up to – in real time.  So let’s say your Twitter pal “John Smith” followed four new individuals today on Twitter.  The Activity tab will alert you that he’s done so and show you who he followed.  If he favorited an item, you can see that he’s done so in the notifications of the Activity tab.  And if three of your friends retweeted a particular tweet, you’ll see the tweet and all who retweeted.

“It provides a rich new source of discovery by highlighting the latest Favorites, Retweets, and Follows from the people you follow on Twitter – all in one place. It’s easier than ever to explore Twitter, connect with people, and discover what’s happening around the world.”

Currently, only some Twitter users have the new Activity tab while many others are still waiting.  And many people have never even heard of it.

“We are rolling out these new features on Twitter.com, and we’re starting with a small percentage of users.”

One could speculate that perhaps some of the delay here may be due to Twitter’s purchase of Julpan, a social analytics company expected to help users identify interesting content on Twitter, presumably through this new tab feature. However, Twitter has not posted any updates on this to its blog.

After the recent Facebook changes that put users up in arms, as ABC News reported, it’s understandable that Twitter might be reluctant to slap the new feature on everyone’s accounts right away. But that’s what Beta is for! If you plan a change, make the change. Even if your customers don’t pay for your service, you really shouldn’t irk them.