Is Self-Employment Feasible for You?

Not everyone thinks going into business is a viable career option. But people in some countries think it’s a lot less feasible than their counterparts elsewhere.

The Japanese are particularly pessimistic about their chances of becoming becoming entrepreneurs. A Gallup Organization survey of 26,000 people aged 15 and older in 36 countries reveals that 87 percent of Japanese believe that becoming self-employed in the next five years is not practicable. At the other end of the spectrum are Icelanders, only 44 percent of whom think that going into business for themselves in the next five years is not possible.

I thought that America was the land of opportunity and entrepreneurship was the American dream? So why don’t more Americans think starting a business in the near future is viable?

Percent Who Think Self-Employment in the Next Five Years is not Feasible: 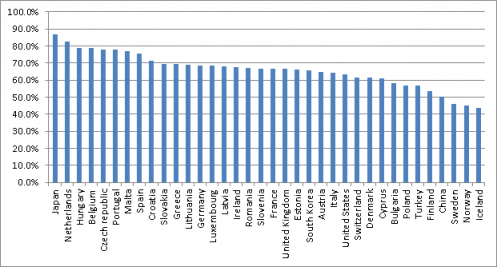 Source: Created from Data in the Flash Eurobarometer