Whether it’s the economy causing the rise in freelancers these days, as Business on Main reports, or just the ability to hire someone virtually at a fraction of the cost of a full-time employee, freelancing is hotter than it’s ever been. And while the unemployment rate may be hovering at just over 9 percent, the news about the percentage of freelancers finding work is much more positive. In fact, as The Christian Science Monitor points out, it’s been estimated that freelance roles will make up half of all the new jobs created during the period of economic recovery (whenever that starts). 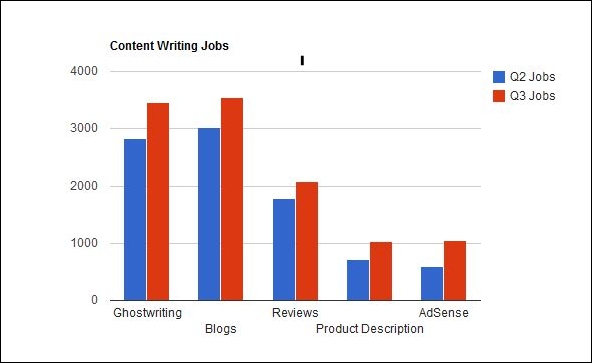 Chart above: Content Writing Jobs Are Once Again Thriving

Each quarter, Freelancer.com charts the fastest-growing online jobs for freelancers. Delving in, we found some interesting facts.

Freelancer.com attributes this to the slowing of Android project growth. According to Freelancer.com’s press release:

“Recently there has been some backlash in the hacker community over whether the complexity, hassle and walled garden of native mobile applications makes sense versus supporting a straight-out Web application – especially with HTML5 coming.”

I’d be curious to see how that changes mobile app development. After all, every time there’s a new platform (iOS, Android, Windows Mobile), developers have to scramble to learn the ropes. I wonder how HTML5 (which makes it easy to write a single program that can be used as an app on multiple platforms) will change the freelance gigs situation for developers?

And good news for us writers: Content jobs are back! After Google Panda killed content writing jobs last quarter, they’re once again thriving. (See the chart above.)

In general, companies are hiring writers, designers, programmers and SEO experts to give them the competitive edge. In these situations, it’s often cheaper to hire for just the work you need done than to pay full-time benefits. Do you use freelancers in your company?