It seems like the end of the year brings about a desire to evaluate and plan. Maybe it’s the New Year’s resolution syndrome. The problem I’ve found with this is that while many people make promises and expect a successful result, they don’t put actions behind the promises. 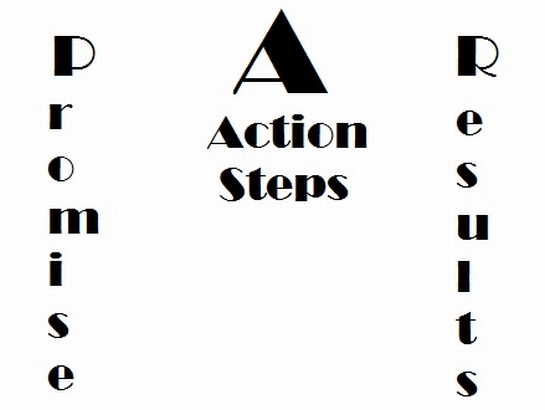 Acording to Mina Watkin’s blog post,  “New Year’s Resolutions: How Will YOU Finish the New Year?” John C. Norcross conducted a study which showed that only 46 percent of people are successful with their New Year’s resolutions after six months. That’s less than half!

I’m confident the people who were unsuccessful were well-intentioned and really believed they could accomplish their goals. They just didn’t take the time to set up action steps for achieving those goals. This happens all the time. We set a goal and then go off and do stuff. We don’t take the time to plan the steps for achieving the goal. No wonder only 46 percent of us make it past six months with our New Year’s resolutions!

Look at it this way – you set a goal. That goal is big. It’s so big that you can’t get your arms around it. It’s like standing right next to an elephant and looking at it. All you see is gray. However, when you step back and look at the elephant, you can see that it has separate parts. Now you can pick a part and determine how to eat it.

Yes, this is how you eat an elephant! So how do we take this information and create a system for keeping our resolutions that works? We go through a process I call roadmapping. Roadmapping helps you put the action steps between your promise and your desired result.

Here’s how it works. Close your eyes and picture your business 12 months from now. What does it look like? What kind of revenue are you realizing? What functions are you performing? Do you have staff? What do your clients look like? How many do you have?

Continue to answer all the questions you can think of about your business. Once you have a clear picture write down up to three top promises on a piece of paper. You could have fewer than three, but please don’t pick more. You’ll see why in a minute.

Now work backwards from there. What steps need to be taken in order to get to each of the three results? This helps you identify the next thing you can do to move the ball down the field.

Example: In December 2010 I set a goal of acquiring 10 paid speaking engagements in 2011. That was the promise. Getting the engagements meant that I needed to be talking to the event planners. In order to talk with event planners I needed to know what events were planned for 2011. Then I needed to determine how I would reach out to their planners. And I needed a speaker’s one-sheet. By working backwards I came to the understanding of my first steps–and these steps had due dates on them. The first was research. The second was one-sheet creation. The third was outreach. Once I had gotten that far, it was time to create the next set of action steps.

Do you know what happened? I had five paid speaking gigs scheduled within the first quarter of 2011. Half of my goal had been achieved! It is because of the action steps that I was able to achieve my goals. I continued to gain paid speaking gig and hit my promise of 10.

You can do this too. All it takes is setting up the first action steps and starting the process. You’ll be able to see your accomplishments, adapt if necessary, and see how you are moving toward the promises you’ve made to your business.

Diane Helbig is a Professional Coach and the president of Seize This Day. Diane is a Contributing Editor on COSE Mindspring, a resource website for small business owners, as well as a member of the Top Sales World Experts Panel at Top Sales World.
4 Reactions
Leave a Reply Cancel reply
Subscribe
Follow @smallbiztrends
RSS LinkedIn Pinterest iTunes