Has Your Site Been Pandalized by Google?

In February of 2011, Google kicked off a series of updates dubbed “Panda.”  The Panda algorithm has demoted some of the spammy sites that had climbed search engine results. Unfortunately, these fly-by-night operations weren’t the only victims of Panda.

It turns out that some small businesses have also been “Panda-lized.”  There have been  7 updates of the algorithm this year in 2011.  Discussion boards and blogs are littered with anguished entrepreneurs and business owners pointing out how their organic search traffic has dwindled due to their sites being dumped from top search results after Panda updates.

Are You There, Google? It’s Me, Small Business

While Google assures everyone that its efforts are for the greater good,  some Webmasters contend Google doesn’t realize how much it is hurting small businesses.

Yes, larger sites have also been hit, but many of them have been able to put their Web teams and SEO teams to work to make changes.  Small businesses, however, tend to have a harder time riding out the storm and recovering.  Most small businesses don’t have SEO staff internally.  Their use of external SEO professionals is probably limited due to costs.  Many business owners or key staff are do-it-yourselfers wearing multiple hats.  They have to cannibalize time from other business urgencies to understand and cope with algorithm changes.  And fewer small businesses have the revenue streams that larger companies have, to fall back on until search traffic rebounds.

Small business owners aren’t just sitting back and taking it. A site called Saving Small Business aims to get Google’s attention, or at the very least, everyone else’s attention, on the matter. 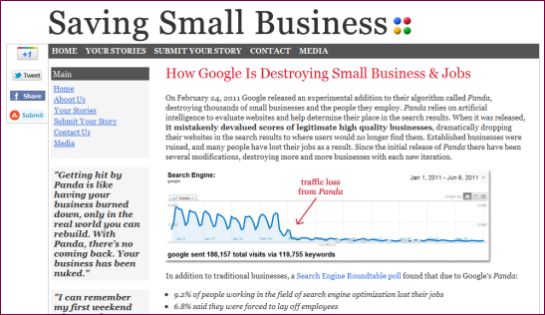 The founder of the site, who asks to be identified only as “Max,” created the site in response to Panda’s first launch:

“On February 24th we woke up to find our e-commerce business annihilated.  We quickly discovered it was due to Google’s Panda after doing some research on the web.  Although we were extremely frustrated and knew we were incorrectly penalized, all of our thoughts and actions were focused on saving our business.  It wasn’t until we did everything Google recommended in their suggestions and more, and then saw our site hit yet again in October that we decided we had to try to do our part to bring attention to this.  We’ve been in business for many years, our customers love us, and we’re a real small business with real employees.”

Saving Small Business is aimed, says Max, at bringing attention to the damaging effect of the Panda updates on small businesses:

“We understand Google has a right (and even a duty) to adjust their search results to provide the best experience possible for their users.  But what they’re doing with Panda amounts to unnecessarily experimenting with people’s lives.  Panda is a machine learning (artificial intelligence) experiment, and we want small businesses, the media, and the general public to understand Google’s experiments are destroying businesses and people’s lives.”

The site encourages other small business owners to tell their stories. Contributors to the site tell tales of losing their houses and laying off employees who were more like family. Max isn’t alone in feeling frustrated. Chriss Bristow, owner of a car parts site, and a retail website, is one such annoyed small business owner. His site is over 14 years old, and he insists he has only ever used “white hat” SEO techniques to drive traffic.

When Bristow noticed his site had slipped down in ranking, he contacted Google …to no reply. He tried to follow Google’s suggested guidelines and resubmitted his site, but traffic continued to worsen.  Bristow says:

“Nowadays when I run a Google search for something that we also sell, virtually all the first “spots” are taken by Amazon, Amazon affiliates, other affiliate websites, scraper mash-up pages and spammed Facebook pages that almost always point to Amazon. Now I realize that Amazon is a monster shopping site, but what makes them an authority site for auto parts?”

Bristow is saddened by the fact that his family owned business has had to lay off several employees, and he attributes it to Google Panda.

Now, before you start boycotting Google (is that even possible?) it’s important to understand that Panda wasn’t created to single out small businesses.  But despite its intended solution to clean up the Web, some industry experts, like Aaron Wall of SEOBook, contend it has had a disproportionate effect on small-business sites, especially ecommerce sites:

“Panda was sold by Google engineers as a way to demote low quality content while promoting high quality content. Ultimately what it did was promote large brands & social platforms, while throwing many small ecommerce businesses (and a few big content farms) under the bus. The impact of Panda makes it hard to have a large website (in terms of page count) unless you also have a large brand.”

Small businesses may be suffering an unintended consequence of Google’s effort to cleanse the Web, but there are things you can do to minimize the effect, according to Aaron Wall:

And if you have a story of being “Pandalized,” share it on Saving Small Business. Who knows? Maybe Google will be listening.

Susan Payton is the Communications Manager for the Small Business Trends Awards programs. She is the President of Egg Marketing & Communications, an Internet marketing firm specializing in content marketing, social media management and press releases. She is also the Founder of How to Create a Press Release, a free resource for business owners who want to generate their own PR.
14 Reactions
Subscribe
Follow @smallbiztrends
RSS LinkedIn Pinterest iTunes