Is Your Voicemail Conspiring Against You? 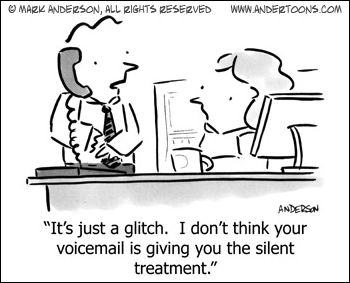 There was a woman at one of my old jobs who was in a constant state of war with her voicemail. She was sure that phone was somehow plotting against her. Losing messages, ignoring calls, garbling audio… If there was a way to have trouble with voicemail, she had it.

One day her voicemail stopped working altogether. No error message, no half-recorded calls–just nothing, and lots of it. She was beside herself.

I stopped by her desk and suggested that maybe her phone was just ignoring her, and this cartoon manifested itself.

I have no idea if she and the phone ever came to terms, but I’d like to think so.