To motivate investors to reinvest in additional rounds of financing at start-up companies, venture capital deals often include “pay-to-play” provisions. Under these provisions, investors that don’t reinvest have their preferred stock converted to common stock or otherwise made less preferential, VC Experts explains.

The figure below shows data on the share of venture capital deals with pay-to-play provisions taken from the Venture Capital Report produced by law firm Cooley LLP. While the data only cover deals for which Cooley did the legal work, they show the frequency with which VCs are using pay-to-play provisions.

While the trend is imprecise, the pattern is clear. Pay-to-play provisions have become less common since the fourth quarter of 2003 when Cooley first began to track this measure. 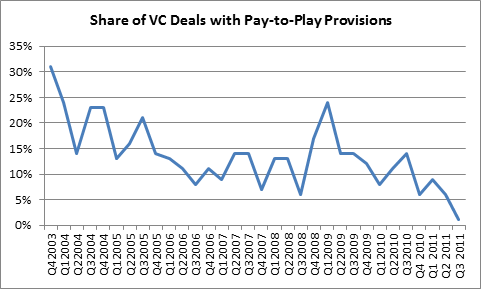