The Shafran Moltz Group conducted an annual small business survey of 5,000 business owners this past month. The outlook continues to be uncertain. Forty five percent of respondents thought the economy was finally steady and do not believe there will be a double dip recession. However, over one third still saw the outlook as more cloudy. They thought that the economy was basically stuck in neutral or GDP could even decrease this year. 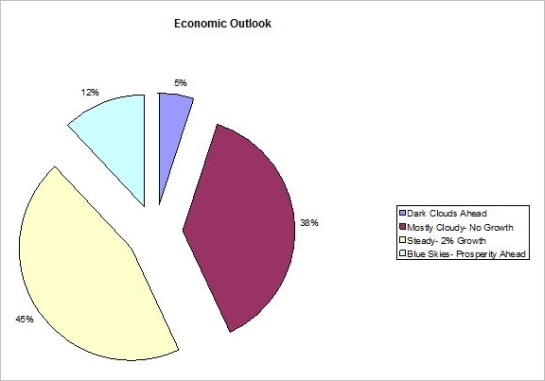 Health insurance continues to be the fastest increasing cost for small business owners. Even with impending new legislation, 69% of owners thought they would see premium increases from 5% to 20%. A quarter of the respondents predicted premium increases of 20% or higher.

No matter what President Obama says, 68% of the small business owners think that banks will stay missing in action for lending capital in 2012. This is a result of both the FDIC and the banks staying averse to risk. However, a quarter of the respondents did see light at the end of the tunnel and believe borrowing will increase this year.

Small business owners think that politics will dominate this election year. When asked, “Who is the best presidential candidate for small business,” owners were split between President Obama and the eventual Republican nominee. Surprisingly, 33% wished that Steve Jobs could take the job or someone else.

The most common concerns small businesses mentioned for the coming year were how the continued uncertainty in the economy and gridlock in Washington affects their own inability to make decisions. Added fears were how the euro crisis and lagging home prices will hurt the overall economy in the long run.

Editor’s note: The Shafran Moltz Group is the author’s company.

Barry Moltz gets small business owners unstuck. With decades of entrepreneurial ventures as well as consulting with countless other entrepreneurs, he has discovered the formula to get business owners marching forward. His newest book, BAM! shows how in a social media world, customer service is the new marketing.
12 Reactions
Subscribe
Follow @smallbiztrends
RSS LinkedIn Pinterest iTunes