For many social media users, we read articles and blog posts first thing in the morning. Most of those we’d like to share with our networks, but we don’t want to bombard our contacts with all the content we’ve read. Companies have come up with tools that help us schedule our tweets and status updates, but many still require us choosing a time and date for a post to go live. There needs to be a simpler solution. 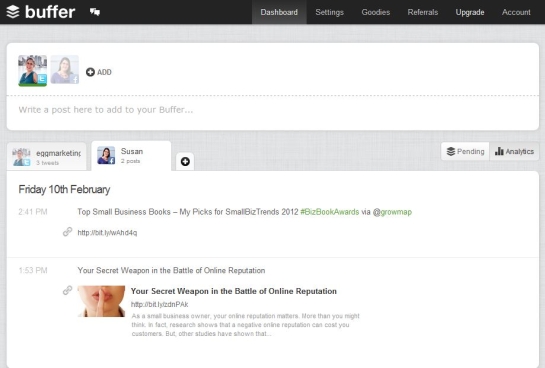 That’s what Buffer co-founder Joel Gascoigne (@JoelGascoigne) realized when he encountered this issue. And in 2011,  he came up with a tool that allowed users to stagger their social media updates throughout the day in preselected time slots. To date, Buffer (@bufferapp) has about 120,000 users, and is growing by 30% monthly.

“We took 1 million Tweets sent via Buffer and wanted to find out how Buffer would improve performance. The key result was that anyone starting to use Buffer, would increase the number of clicks on their links by 200%, they would double the number of retweets and increase their Klout score by 3.5 points within 3 weeks. This was very powerful to learn.”

What’s in it for Small Businesses?

Using a tool like this to keep your social media stream steadily pumping out content is not only a time saver, but it also helps you connect with your social media contacts by providing useful articles and links. There are a few ways you can Buffer a website or a status update:

1. Log into your Dashboard and type in an update. Choose the “Buffer” option, which sets your update aside until your next scheduled status update slot.

2. Install a browser extension for Chrome, Safari or Firefox. When you visit a page you want to share with your network, click the Buffer button.

Currently Buffer supports Twitter and Facebook accounts, but Widrich says LinkedIn offerings are around the corner, and the company hopes to add Google + and Pinterest as well. Currently users can Buffer from iPad, iPhone and Android based phones as well. Buffer offers a free account that lets users manage one Twitter and one Facebook account, and hold up to 10 posts in the Buffer. After that, plans start at $10 a month.

Susan Payton is the Communications Manager for the Small Business Trends Awards programs. She is the President of Egg Marketing & Communications, an Internet marketing firm specializing in content marketing, social media management and press releases. She is also the Founder of How to Create a Press Release, a free resource for business owners who want to generate their own PR.
11 Reactions
Subscribe
Follow @smallbiztrends
RSS LinkedIn Pinterest iTunes