Are you a small business owner with an American Express card? Well does Twitter have a deal for you! Last week Twitter formally announced a self-serve ad service designed to let small business owners buy and place ads in their Twitter stream using their AmEx card.

Yes, all ads must be placed through your credit card, which serves two purposes for Twitter. First, it means they don’t need any phone representatives to take ads and, second, it serves as an easy way to screen new advertisers and keep bad people out. The service is currently only open to 10,000 small and mid-size business owners (each getting a $100 credit from AmEx), but Twitter is expected to let in more buyers over time. 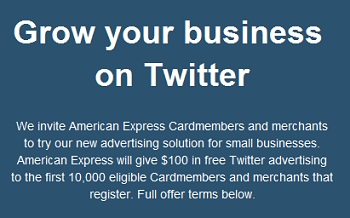 As is the case for any of Twitter’s 3,000 advertisers, small businesses can set bids for promoted accounts on a cost-per-follower basis and for promoted tweets on a cost-per-engagement basis/ In the latter case they pay only when users actively engage with the tweet (by retweeting, for instance.) While national brands might be bidding on keywords or hashtags associated with major events like the Oscars, which makes bidding competitive and expensive, small businesses would be more likely to bid on highly specific terms and to localize their bid.

So small business advertisers will be able to specify how much they want to spend, pick the cities they want their ad to appear for, and then construct their own sponsored tweet. It’s an inevitable growth move for Twitter as the social networking site attempts to start generating revenue; however, I do wonder how effective it will be for small business owners, especially small business owners who don’t have any experience with paid advertising. For some, this may be a low-barrier way to get into the paid ads game, but others may have a difficult time getting used to the 140-character format.

It will also be interesting to see how users will react. Part of the “fun” for users who engage with brands on Twitter is that it feels two-sided. They’re having conversations and they’re interacting with these brands as real people. Once SMBs start taking to Twitter for ads, not chit chat, will that change users’ willingness to engage with them there? With SMBs be able to balance the two?

Naturally, Costolo is confident that this will be a lucrative new area for SMBs:

Mr. Costolo pointed to Glennz Tees, an online T-shirt retailer that was part of this winter’s pilot group, as a small business that has already had success using the self-serve platform. After a character on “The Big Bang Theory” appeared on the show wearing a Glennz shirt, the owners took to their Twitter account and bought up terms related to the show. Mr. Costolo claims they doubled their holiday sales over the previous year and tripled their Twitter followers.

A fun little anecdote, but we’ll have to see what happens for the rest of the SMBs out there. I think there’s potential here for small business owners who have mastered talking and engaging their audience in small snippets, but if Twitter becomes too overrun with ads, we’re obviously going to feel some pushback from users.

But what do you think? As a small business owner, will you experiment with Twitter’s new self-serve ad platform or will you continue to keep advertising off social media?

If you are interested in signing up, head to https://ads.twitter.com/amex to get started. It’s worth noting that the ad system isn’t live yet. Twitter and AmEx are simply inviting advertisers to sign up for a formal launch of the service in March.