You may have heard of a flash mob: a group of people meet at a certain time and place and begin “spontaneously” dancing a routine. But what in the heck is a “cash mob?” And why are businesses all over the United States (and other countries)  clamoring to get involved in them? 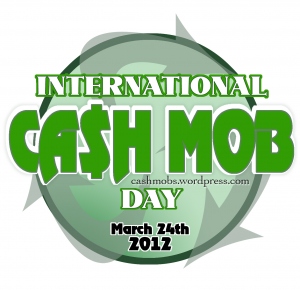 Cash mobs were first seen in 2011. The idea is to get people into local businesses to shop and support them. Consider cash mobs the people’s stimulus package, to help small businesses. Participants are encouraged to visit a particular business on a given day or time period and spend at least $10 or $20. Many spend more, and that’s exactly what struggling small businesses need right now.

The proof is in the pudding: in Mount Clemens, Michigan, one business that participated in a cash mob there saw a 600% increase in sales over the previous weekend. Another doubled its Saturday afternoon sales as a result. People are waiting in lines that wrap around the block just to make a purchase in honor of the cash mob.  There are dozens of other stories of small businesses seeing an injection of cash as a result of these pop-up sale days.

Why Do Consumers Flock to Cash Mobs?

In the same way that liking Pinterest is cool, being a part of a cash mob is, too. It’s being a part of a story, and people like that. Cash mob organizers are using social media to announce locations and get collective buy-in from consumers, who help spread the word to their friends on Facebook and Twitter. And supporting local businesses is always something that makes people feel good.

Thanks to the growing popularity of cash mobs (there are over 100 cities that have created them in the U.S.), March 24, 2012, has been designated International Cash Mob Day. If you’d like to start cash mobs in your city, here are some steps for doing so, as well as some general rules you can apply to your city’s cash mob program. Here are some other tips for getting started:

It will be interesting to see how more cash mobs might affect the health of small businesses. After all, it’s the small things (like one person spending $10) that add up to success.

Susan Payton is the Communications Manager for the Small Business Trends Awards programs. She is the President of Egg Marketing & Communications, an Internet marketing firm specializing in content marketing, social media management and press releases. She is also the Founder of How to Create a Press Release, a free resource for business owners who want to generate their own PR.
11 Reactions
Subscribe
Follow @smallbiztrends
RSS LinkedIn Pinterest iTunes