A much larger fraction of entrepreneurs expects to create jobs than actually do. This difference means that policy makers need to take entrepreneurs’ job creation plans with a grain of salt.

The Global Entrepreneurship Monitor (GEM), a consortium of university researchers around the globe who track entrepreneurial activity, “defines high-growth entrepreneurs as those who expect to have 20 or more employees (other than the owners) within the next five years.” By that definition, 17 percent of Americans founding a company expect to have a “high growth company,” as the figure below shows: 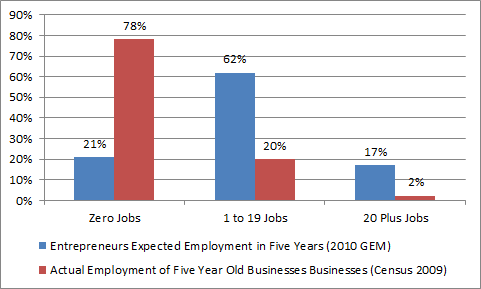 Source: Created from data from the U.S. Census and the Global Entrepreneurship Monitor

This percentage is much higher than the share of entrepreneurs that actually has a high growth company. According to Census’s Business Dynamics database, only 2 percent of five-year-old companies have 20 or more employees.

Policy makers should respond to this over-optimism the way investors do – by discounting entrepreneurs’ projections.

While investors might focus their discounting on entrepreneurs’ estimates of sales and profits, the principle is the same for policy makers and estimates of job creation.