High Growth Firms Don’t Make Up for the Others

Many policy makers believe in the myth of the high-growth firm as employment silver bullet. According to this myth, rapidly growing young companies add so many employees that they make up for jobs lost at companies that stagnate, shrink or die. Therefore, boosting employment is just a matter of identifying high-growth new businesses.

This myth is attractive to our elected officials who like to celebrate the entrepreneurs whose courage and vision create employment for others. Unfortunately, it is a myth. High-growth young companies are too few and too slow-growing to make up for the jobs destroyed by other businesses. 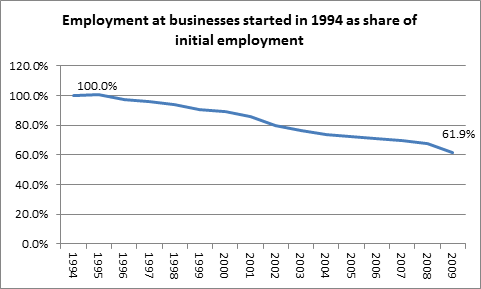 Data from the Bureau of Labor Statistics (BLS) on the employment of the 1994 cohort of start-ups illustrates this point. The BLS tracked the number of people employed in all companies started in 1994 annually until 2009.

In the figure above, I have translated these numbers into the percentage of the cohort’s 1994 employment that each subsequent year’s employment represented. With the exception of 1994, when the cohort’s employment increased to 100.4 percent of its 1994 level, the cohort employs fewer people with each passing year. By 2009, in fact, the businesses founded in 1994 only employed 61.9 percent of the number of people who worked for them in their founding year.

The declining fraction represented by the figure means that the high-growth companies started in 1994 never create enough jobs to make up for the ones lost at the companies founded in the same year that shrink or die (let alone the ones from other cohorts that get smaller or disappear).

While the high-growth companies are important – without them the employment patterns would look even worse – alone they cannot maintain employment, let alone grow it.