Why The Picnik Photo Editing Site Is Shutting Down, And Alternatives

Picnik, the free photo editing site used by many entrepreneurs and small businesses, is closing. It’s last day will be April 16, 2012.  It’s being rolled into Google+.

Picnik is an online service known for being intuitive and easy to use.  Instead of buying photo editing software (such as Photoshop, which is pricey for occasional use), or using a free program like Irfanview (which is feature-rich but can be diabolically confusing), you could go online to Picnik.  You upload a photo and using the online controls, you crop it, re-size it, adjust colors or touch it up.

But the best part of Picnik is the personalization.  You create fun special effects such as superimposing  flowers or mustaches over your image. Or you make your images look elegant by adding drop shadows, artistic effects, and unique frames. 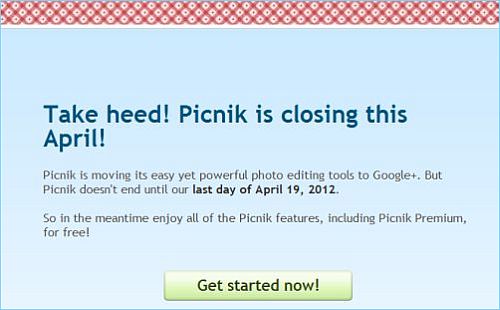 It’s a handy service.  But if it’s so handy you may be wondering why it’s going away.  The answer is simple:  Google is getting behind Google+ in a big way.  The social network started by Google that is already dominating search results for some searches, is gobbling up Picnik.  The photo editing and special effects capabilities will be incorporated into Google+, in a feature called “Creative Kit.”

Picnik Got Caught Up in The Bigger Picture

Picnik was acquired by Google in 2010.  A frequent topic of online conversation these days is how Google is showing favoritism with Google+.  Picnik is just one small part of Google’s march to draw people into using Google+.

Google has long since evolved into more than a search engine.  These days Google offers services and products — everything from your website traffic analytics software, to your email program, to a service that helps you pick credit cards.

Picnik customers are up in arms over the closure of their service, as the 1823 comments on this blog post on the Picnik site demonstrate.  You could hardly expect comments to be positive — but even so, there’s a distinct flavor that people feel like they are being pushed into Google+ unwillingly.  For example, a customer named “Kate” wrote:

Picnik and Google point out that many features will be available in the Creative Kit of Google +.  Others note that it’s not the same thing.  Google+ is a challenge to log into if you use several GMail or Google Apps accounts in your work.  It’s not nearly as streamlined as using a simple stand alone site like Picnik, critics say.  And some people just resist being forced to use another service.

Google Announced it The Right Way

While entrepreneurs and small business personnel may bemoan the loss of Picnik, you can’t argue with the way Google made the announcement.  It was classy all the way.  They notified users months in advance that the service would be shutting down (see image above of the notice on the home page).  They also made all premium features free, “as a parting gift” they said (and refunded premium payments paid in advance).

This is a far better way to announce the closure of your service, than to bury the notice in support forums while you continue to accept new paying customers.  One company did that not long ago, leading to rude surprises.

Google also created an export feature called Takeout to allow you to grab your files at Picnik and save them.

We small business leaders are nothing if not pragmatic. Picnik shuts down, but the show must go on. What can you use instead to replace Picnik, if you don’t want to use Google+?

For alternatives to Picnik, here are 8 to check out: PicMonkey, BeFunky, FotoFlexer, iPiccy, WebFetti’s Photo Editor, Pixlr, LunaPic and Phixr.   If you know of other alternatives, please leave a suggestion in the comments below.

Anita Campbell is the Founder, CEO and Publisher of Small Business Trends and has been following trends in small businesses since 2003. She is the owner of BizSugar, a social media site for small businesses.
23 Reactions
Subscribe
Follow @smallbiztrends
RSS LinkedIn Pinterest iTunes