What Happens to the Supply Chain? 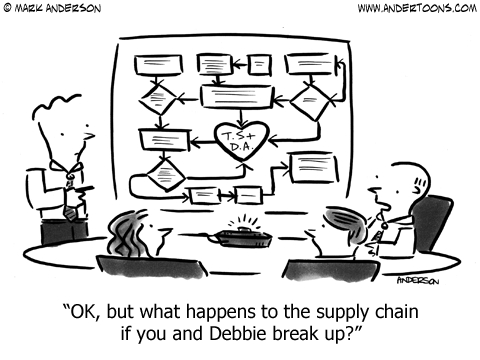 Before becoming a cartoonist I worked at a company that was getting its ISO-QS-PDQ 9009 certification (or something like that), which for me meant lots of meetings, paperwork, and flowcharts.

There were flowcharts for who did what, what went where, who was who and so forth. It got confusing, especially when we realized that one flowchart had essentially become a Möbius strip.

But it’s been a while since I really got into a flowchart, so I had to go back and do a little research for this cartoon to make it work more or less. It’s probably not strictly necessary for the joke, but it was a nice trip down memory lane.