The Benefits and Controversy of White Roofs

Much ado has been made in recent years about the benefits of installing white or “cool” roofs. The idea: Light-colored materials reflect heat, while dark roofs, such as those made of asphalt and tar, absorb heat, driving up air-conditioning consumption in order to offset it. 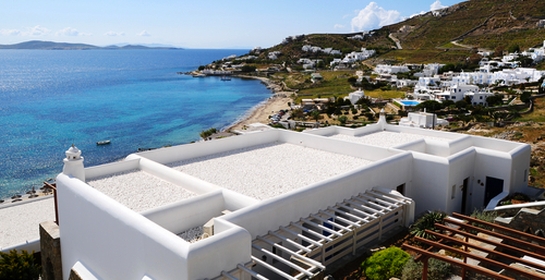 So, in other words, installing a roof that is white or “reflective” helps save energy and money.

Energy Secretary Steven Chu has pressed Americans to install cool roofs on their homes and business, even committing his own department to making all its new roofs white.

But is the hype about cool roofs legitimate? Should you consider one for your business?

First, the net energy savings generated by white roofs compared with dark roofs depends partly on where you’re located. White roofs seem like no-brainers in warm climates like Phoenix, Las Vegas and Miami, where they can keep air-conditioning bills in check year-round. States like California even now mandate white roofs on commercial buildings.

In cooler climates – think Detroit or Toronto — the issue is less straightforward. While white roofs may shave electric bills in hot summer months, studies suggest they increase winter heating bills.  The question is by just how much. Some scientists say white roofs can increase heating costs more than they save on A/C costs. Scientists at Lawrence Berkeley National Laboratory dispute this, saying the electricity savings of air-conditioning has found to outweigh any negatives even in cool cities like Minneapolis. (Check out this interesting analysis from Treehugger.com.)

Another question is the overall environmental benefit of reflective roofs  – and whether they actually do slow global warming. A Stanford study published last year found that the heat being reflected from white roofs may actually exacerbate climate change by contributing more heat to the atmosphere and absorbing more emissions. Earlier studies have suggested that whitewashing roofs can have a cooling effect.

If you do decide to install a white roof on your business or home, make sure you do some research about costs and options in your area and get at least a few bids from different contractors. There are several different types of reflective roofing materials.

Also look into incentives available to you. Some states offer rebates for installing white roofs, as do some electric utilities. You can look up incentives at DSIRE.

Kelly Spors is a former small-business and entrepreneurship reporter and blogger for The Wall Street Journal who has also written for Yahoo!, Entrepreneur, NFIB's MyBusiness magazine and The New York Times. Kelly is now a freelance editor and writer based in Minneapolis and has previously managed communications for an environmental non-profit that helps businesses find ways to be greener.
11 Reactions
Subscribe
Follow @smallbiztrends
RSS LinkedIn Pinterest iTunes