It’s possible that Congress might just have gotten one right. When does that ever happen?  Both chambers of Congress passed the Jumpstart Our Business Startups (JOBS) Act (H.R. 3606), to the accompaniment of much bally-hoo. The bill, which has been touted as a much-needed kick in the pants for the economy, is a rare bi-partisan animal in hyper-partisan election year Washington. That’s something all by itself. 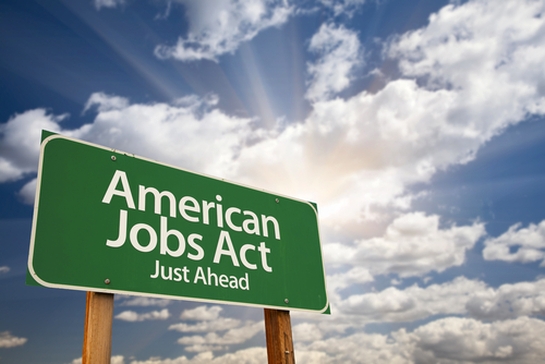 The JOBS Act essentially loosens or simply removes a slew of securities regulations that were perceived as getting in the way of new investment in “emerging growth companies.” So, as long as those companies are raising less than $1 million, they will find themselves facing far fewer paperwork and other regulatory hoops to jump through once this bill takes effect.

Definitions of “small business” are always interesting but here’s a factoid for you when you hear people praising this bill as a bit of targeted small business legislation: you are an emerging growth company if your gross revenues are under $1 billion in their most recently completed fiscal year.

Somehow, people in Washington always make it sound like earning $1 billion in gross revenues is a simple thing. Anybody can do it, right?

This was beginning to look like yet another instance of microbusinesses coming away from another foray into small business policy empty-handed until Senator Jeff Merkley (D-OR) introduced his crowdfunding amendment into the mix. The amendment was co-sponsored by fellow Democrats Michael Bennet (CO) and Senate Small Business Committee Chairwoman Mary Landrieu (LA) — and, to get that bi-partisan label in there, Republican Scott Brown (MA).

What the amendment does is to provide an exemption for crowdfunding through web sites like Kickstarter, WeFunder and the U.K.’s CrowdCube.

The legislation also provides that the amount that any individual is permitted to invest is reasonably small, so that nobody gets cleaned out by any of these investments. The intermediaries have to register with the Securities and Exchange Commission, and there will be some paperwork requirements of the small businesses, too. No administrative free rides here but, compared with the degree to which buisness owners are required to twist themselves into pretzels for even a small private offering, crowdfunding looks to be much closer to painless.

Of course, even with the bill sitting on the President’s desk, the debate rages on. We just emerged from a financial meltdown caused by deregulation and now we’re deregulating again? I guess this is where we get to wait for the sky to collapse again. First, it was the Savings & Loan fiasco in the 1980s and then the housing market bubble that led to the Great Recession, and now this.

More deregulation will promote fraud! People will lose money! The government must do a better job of protecting the public from its own stupidity!  (Well, no, nobody actually said that but that is what they meant.)

The biggest hit taken in the economy as a result of the so-called Great Recession was in overall levels of investment. Consumer spending is back up to more than 70% of GDP, government spending is up a little (much less than you’d think to listen to the budget hawks in Congress) and the trade deficit is more or less back to normal. But investment fell by a whopping 25% and it is only not almost-but-not-quite back to its pre-recession levels.

At the same time, thanks to its multiplier effects, it’s investment that will make this long, slow, painful recovery much shorter, much faster and much less painful. The JOBS Act, including this crowdfunding amendment, is Congress’ way of pumping some backbone back into timid, not to say still-terrified, investors.

It’s the crowdfunding piece that could conceivably help microbusinesses overcome their perpetual problem of lack of access to capital.

On the other hand, if the real-life application of the crowdfunding provision turns out to be too paperwork-heavy, microbusiness owners won’t use it.

A lot will depend on what sorts of rules the SEC writes to help it implement the JOBS Act. Stay tuned.