There is an interactive map showing the best states for businesses taxes, in green. Middle of the road states are blue.  And the worst states are in red: 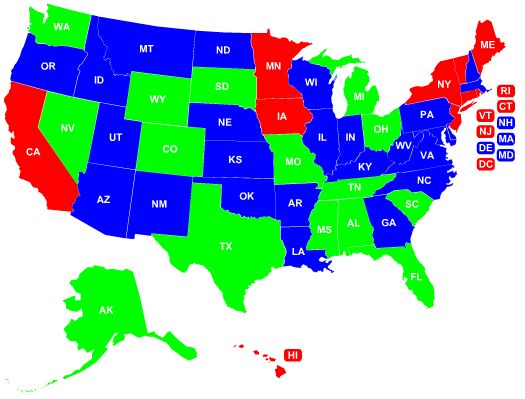 And what are the worst states for business taxes by name?  It probably won’t be a surprise that many of them are in the Northeast, long having reputations for being expensive jurisdictions to do business in:

The Business Tax Index 2012 ranks the states from best to worst based on the cost of their tax systems on entrepreneurs  and small businesses.  The Index takes into account 18 different tax measures, and combines them into a single score so the different states  and the District of Columbia can be compared.

According to Raymond J. Keating, chief economist for the SBE Council and author of the report, said, “All taxes matter, whether imposed at the federal, state or local level of government.  They matter to consumers, entrepreneurs, investors and businesses.  State and local levies matter in terms of a state’s competitiveness.  And they matter when it comes to economic growth and job creation.”

Comparisons With Other Years

And so how does the listing compare with past years?  I checked the 2010 state tax rankings and found very little difference in either the top or bottom rankings.  One notable exception:  Massachusetts managed to pull itself out of the bottom 10 and in 2012 now ranks number 35.  Hawaii and Connecticut, on the other hand, slipped a few spots since 2010. Other states may have  shifted a bit here and there, but the top and bottom are still largely the same two years later (or the states were near misses with making it into the top or bottom 10).

This year, the SBE Council’s 2012 report notes these positive and negative developments:

“On the positive side, states like Indiana, Arizona, Maine, Michigan, North Dakota, Delaware, and Oklahoma made some positive steps forward in providing tax relief. Also, in addition to some recent pro-competitive moves regarding income taxes, Ohio’s death tax will be eliminated next year (to be reflected in next year’s Business Tax Index), and Indiana has begun a long phase out of its death levy. In contrast, Oregon, Connecticut, Illinois and New York officials, for example, made their states less competitive due to various tax increases.”