The Great Recession’s Effect on Small Loans to Business

Small loans to businesses continue to shrink, falling to $613 billion dollars at the end of 2011, the Small Business Administration (SBA) reports.

The dollar value of small loans is down substantially since the start of the financial crisis and Great Recession. SBA data reveals that the inflation-adjusted value of business loans of less than $1 million shrank by 19 percent between 2007 and 2011. As the figure below shows, we have yet to see any recovery in the real value of small loans to business. 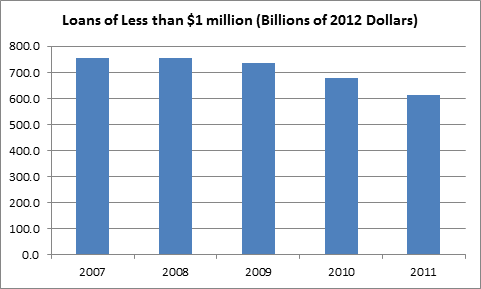 The amount lent has declined in large part because banks are making fewer loans. While the average value of loans shrank 6.7 percent since 2007, the number of loans fell 13 percent, from 24.5 million to 21.3 million. The SBA data doesn’t tell us whether all small businesses now have fewer loans or fewer small companies are borrowing, but other data suggests that the latter is true.