9 Ways to Make a New Product

If you’ve ever had an invention idea, now is one of the best times to be alive. Devices and machines are readily available to help you turn your idea into reality. If you’ve heard of the maker movement, also known as the Do It Yourself (DIY) movement, then you’ll know about some of these tools, technologies, and services. If you have not, you’ll want to read on because this isn’t Star Trek or Star Wars, but it sure can feel like it. The desktop manufacturing or personal factory is upon us. 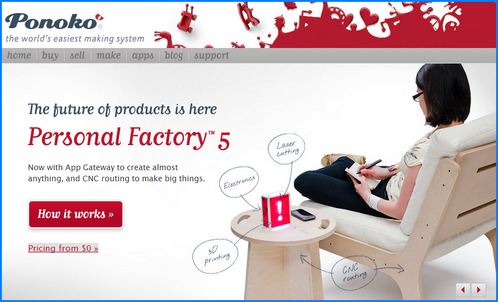 Almost every major city in the world has some sort of space for making things – makerspaces, hackerspaces, innovation centers, sometimes even incubators or accelerators. You just might not know they exist. They are not secret, but they are not always easy to find.

In the last ten years, some of these physical spaces have evolved from co-working, shared office spaces (as fellow contributor Steve King points out in some of his research work about coworking) into modern wood, metal and machine shops.

The following machines and services are affordable for most small businesses that need rapid prototyping of tangible items:

Epilog Laser is one of the leading providers of state of the art laser cutters. I have one of them, as a short term loaner unit, and I’ve been truly amazed at what’s possible. From cutting or engraving wood,  acrylic, and fabric to marking metals, this device helps maker companies get started. For example, if you wanted to put together a prototype for a new type of gadget and needed an acrylic case, a laser cutter could do the job.

MakerBot is the poster child, in a positive way, for the DIY 3D printing trend. They are consistently in the news serving the 3d printer world (which is growing) and run a popular community known as Thingiverse, which serves mostly 3D printers, but also some laser cutting and other machines/devices, too. You can get a kit to build one yourself.

Shapeways is a service bureau that can help you print in 3D. That might be an understatement because most people think of 3D printing as something printed in plastic. Shapeways will break you out of that box: They can print in silver, in ceramics, in glass, in steel, and yes, in different plastic types, including a new elasto plastic that resembles rubber. If you don’t want to buy a printer, but you have designs or ideas, then you’ll want to visit Shapeways and pay-as-you-go.

MakerGear is one of my favorite 3D printer companies because the owner, Rick Pollack, is a guru in the space. He’s been in the business of 3d printers for a long time and has modified or fixed or upgraded many other DIY printers so that they work well for consumers and aficionados. They recently released their M2 printer, which is quite elegant. They sell kits and fully built models. You could be printing out a new product prototype from your desktop shortly.

Ponoko is a maker platform that has laser cutting and 3D printing in its arsenal. The power behind Ponoko is its software called Personal Factory. They 3D print, laser cut and help you manage a project. They offer a community of designers (with free designs and ones you can purchase) that are a terrific resource.

Rapman is based on the RepRap open source 3D printer (one of the pioneers upon which many others are built) and has a large printing bed. They target the classroom as customer, but it could easily work in commercial environments, of course.

LaserSaur is an open source DIY laser cutter that is catching on in the market after launching on Kickstarter last year. This new entrant is shaking up the personal fabrication space. It is aptly named because its cutting/engraving bed is as enormous as a dinosaur. Great value for the money and the satisfaction of building one of the first readily available open source laser cutters.

CutItForYou is a small CNC router shop in my local area, but the owner, Sean Aydlott does jobs around the USA. You have to be a thinker in order to manage all the variations that can come up with computer controlled devices; I call the owner when I want to solve a problem.

TechShop is one of the most amazing commercial membership-based makerspaces in existence. I recently wrote about their partnership with Ford in Detroit on Forbes and am amazed at their growth plans. If you’ve seen the Square credit card reader, you’ve seen one of the products prototyped in a TechShop. Each facility boasts $2 million to $3 million in equipment.

No matter where you live, you can probably find a makerspace nearby. If you don’t have one nearby, it may be your calling to start one and provide a place where inventors, entrepreneurs, and future small company owners can gather and make, hack or invent the next great product. Of course, Ponoko, Shapeways, and CutItForYou can manage your ideas remotely and get them printed/cut/engraved for you.

Have you used rapid prototyping tools to create or modify your invention or product? Share the details in the comments below, please.

TJ McCue served as Technology/Product Review Editor for Small Business Trends for many years and now contributes on 3D technologies. He is currently traveling the USA on the 3DRV roadtrip and writes at the Refine Digital blog.
7 Reactions
Subscribe
Follow @smallbiztrends
RSS LinkedIn Pinterest iTunes