“Tablet computers are for kids and gamers” is the prevailing sentiment that I hear from small business owners. The logic is that a tiny handheld computer won’t really help you get your work done. Even Facebook founder Mark Zuckerberg dissed the iPad by stating it is not a mobile device. But despite a myriad of less-than-positive commentary, tablets are a big part of the near-term business future.

However, you don’t buy it for your kids or your business, but for your customers. Not for them to use (although that might be useful depending on your business), but for you to figure out what your customers are doing, how they are finding you and what mobile really, truly means for you company. Barnes & Noble provided a device for a two-week loan period for this review. 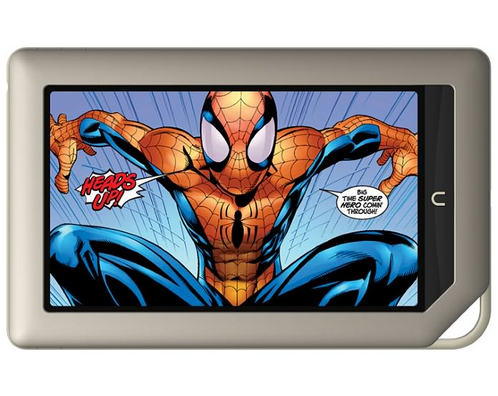 Okay, I couldn’t resist putting this screenshot of the Nook Tablet with Spiderman on the screen, especially after I said it was not for gamers and kids… The rest of my review will be strictly business; I promise. All the corporate images were so boring.
The Nook Tablet is elegant and well thought out. One of the small details that catches your attention is this subtle “grippy” feeling it has on the perimeter.

This recent post, The Mobile Trend: 10 Things to Know, offers some of the reasons why you need to test a tablet and the Nook Tablet is a good choice. Data now shows that more people access Facebook on a mobile device than on a desktop computer. Sure, most of that is on a smaller smartphone, but count the tablets the next time you sip coffee in a Starbucks or independent café. It is a significant number. Those could be your customers.

As I’ve mentioned before, there are simple productivity gains to be had in using a tablet for basic office tasks (email, quick document collaborations) and for field presentations.

What I’d like to see in the Nook Tablet:

Here is a list of the top productivity apps for the Nook.

If you’ve been pondering which tablet to buy for your business, the Barnes & Noble Nook Tablet is a good choice. It is fast, super-fast, for web surfing. It can play flash-based videos. They’ve designed it to be consumer-friendly. And you can take it into any Barnes & Noble store and get support, help, and guidance on using it.

Learn more about the Nook Tablet.

TJ McCue served as Technology/Product Review Editor for Small Business Trends for many years and now contributes on 3D technologies. He is currently traveling the USA on the 3DRV roadtrip and writes at the Refine Digital blog.
3 Reactions
Subscribe
Follow @smallbiztrends
RSS LinkedIn Pinterest iTunes