If you want to explain the pattern of business failure, think of the analogy of infant mortality. The odds that a business will die are highest in its infancy and drop over time.

In fact, by the time that companies enter their teenage years, the odds that they will go under have flattened out. A twelve year old business and a seventeen year old business face roughly the same odds of being shuttered in the following year.

The figure indicates that the new business failure rate for companies started in 1994 steadily declines until 2006 and then flattens out. While the odds of going under never disappear, they pretty much hold steady at 5 percent once the businesses reach age 12. 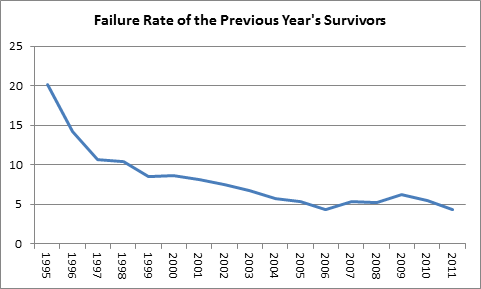