PinAlerts: Discover When One of Your Images Gets Pinned on Pinterest

PinAlerts sends you an email whenever someone pins something from your blog or website — or any other site you wish to track — to Pinterest.  It’s a way to track the interest your products or services are getting on Pinterest. 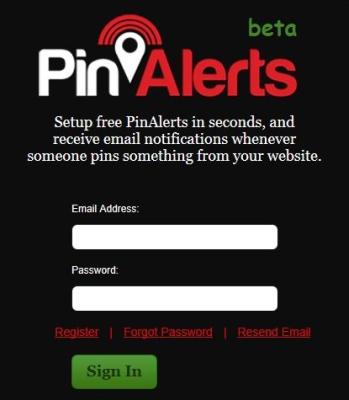 Are you familiar with Google Alerts?  PinAlerts is a similar concept, except it’s for Pinterest, the image-based social site.

PinAlerts is a simple service.  To sign up, go to PinAlerts.com and register. During registration you’ll enter the URL of a blog or site you want to track. Add as many URLs as you like.  You can also go back and change how often you get email alerts.  Then when something from that site gets pinned, you will get an email.

The product was co-founded by Paul Wilson and Janet Thaeler (a contributor here at Small Business Trends).  It was designed with small businesses in mind, and grew out of a tool Thaeler wanted for her own research.  One day she  checked Pinterest to see if someone had pinned any images from her blog. She discovered that someone had pinned her profile picture from her blog and said how much they liked the blog.  Naturally, she was flattered, she says.

But it wasn’t until she saw one of her consulting clients getting pinned, that the lightbulb truly went off.  “People may not leave a comment on your blog but they will write a glowing review on a pin. With PinAlerts you don’t have to keep going back to Pinterest to monitor comments and reviews.”

The advantage of PinAlerts is that you don’t miss anything.  For instance, I can check manually to see what’s being pinned from Small Business Trends at the following URL:  http://www.Pinterest.com/source/smallbiztrends.com. (Check your own site just by replacing “smallbiztrends.com” with your own domain.)  But you may not remember to do that, and, says Thaeler, “it’s not a full list of everything from your site that’s been pinned.”

Here are five ways to use PinAlerts:

1. Identify your target market on Pinterest and get insights into what they like. When someone pins something it’s usually a compliment. According to Thaeler, “The demographic on Pinterest are the Dot Moms – who are more inclined to share. They are typically higher income and educated.” By getting alerts of what is being shared, you get insights into who finds your content interesting.

2. Figure out how to get more Pinterest traffic by seeing what images are popular.  You can see what’s being pinned and either improve on it or otherwise promote those images (being sure that it has a Pin It button to encourage even more shares). What is being pinned might surprise you – you may not have many pinnable images on your home page or blog posts. PinAlerts will give you insights on how you could improve.

3. Authors can promote their books on Pinterest.  If you’re an author be sure to promote your book on Pinterest.  Says Thaeler, “Almost everyone has a board that centers around what they have read or want to read. Hold a contest to encourage pins and use PinAlerts to track them and choose a winner.”

4. Use PinAlerts to conduct market research.  You can research not only your site but others in your market or with a similar audience. When you see the same image or type of image coming up again and again, you know it’s a winner.   Use that  as inspiration for images you create or display on your own site.

5. Get attention from influencers in your niche.  Get alerts of what’s being pinned on the influencer’s site.   Thaeler researched Guy Kawasaki’s site in just such a way to see what was being pinned from his site.  You will start to get a feel for what they like. Then create a pin image you believe would appeal to them and alert them. You can get far more traction if they pin your image than if you do.

The basic PinAlerts service is free.  The founders would like to add premium features, as well as accept advertisements in the emails.  For now, they are focusing on increasing their user base. The founders say they are not aware of any similar services – PinAlerts is a first of its kind.

The service just recently launched and already there are nearly 1,000 users of it.