A few weeks ago, I wrote about the decline in “small loans to business” during the Great Recession and economic recovery that followed. Now I am back to tell you that data on “small business loans” paints an even worse picture of the small business credit markets.

No, this is not a semantics test. “Small business loans” and “small loans to business” measure different things.

The more popular “small loans to businesses,” reported recently by the Small Business Administration, uses data from the Federal Deposit Insurance Corporation Call Reports to track loans of less than $1 million, regardless of the size of the borrowers. The less popular “small business loans,” produced by the Federal Financial Institutions Examination Council (FFIEC), uses information gathered from the banks under the Community Reinvestment Act to measure loans of any size to companies with $1 million or less in revenue.

The statistics on “small business loans” may provide a more accurate picture of the small business credit market than the “small loans to business” figures because big businesses can obtain loans of less than $1 million.

The number of bank loans to small businesses dropped a whopping 68 percent between 2007 and 2010, and the dollar value of the loans declined 55 percent in inflation-adjusted terms. These drops are much larger than the 9 percent decline in the number of small loans to business and the 10 percent slide in the the real value of those loans observed over the same period.

Like the small loans to business numbers, however, the small business loan numbers show that the fall in lending to small companies didn’t just occur during the downturn but continued into the recovery that followed. From 2009 to 2010, bank loans to small businesses fell by 32 percent, and the dollar value of the loans declined 11 percent in inflation-adjusted terms.

The recent decline in small business lending more than offsets the expansion that occurred in the years prior to the downturn. As the figure below shows, the number of loans made to businesses with less than $1 million in sales increased 70 percent between 2005 and 2007. (That is much faster than the rise in the number of companies with sales of less than $1 million, which IRS data show only increased 7.4 percent between 2005 and 2007.)

But even after accounting for a correction for this period of easy lending, bank loans to small businesses have contracted severely. In 2010, the number of loans was at 54 percent, and the real dollar value of the loans was at 48 percent, of 2005 levels. 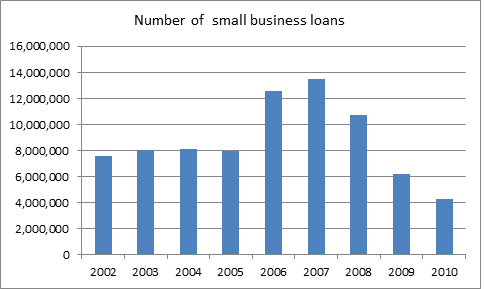