Quite often, the path that leads you to your ultimate destiny is a long and winding road.  Those who stay the course reach their destiny much sooner than those who become distracted by shortcuts and crossroads.  Amos Winbush, CEO of CyberSynchs, joins Brent Leary to share the story of the path to his destiny.  A destiny that lead to the creation of a successful, first generation, universal data synchronization company.  And guess what? Amos has a secret to share! 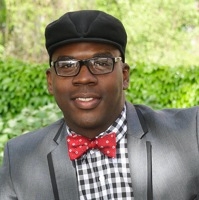 Small Business Trends: Can you tell us a little bit about CyberSynchs and your personal background?

We developed a system that allows for all of your devices to communicate with each other.  Not only a mobile device, but can also send content to a digital camera or an Internet enabled printer.  That is what CyberSynchs is.  We are a first generation universal data synchronization company.

I am 28 and one of those kids that decided they did not want to be in college anymore.  I wanted to go out and actually do.  Of course, my parents hated it, but…

Amos Winbush: They like it now.  But at the time, they did not like it so much. I am the youngest of three kids.  Two older sisters, grew up in Louisiana, really focused on music a lot. My mom and dad both encouraged me to have that creative side.  That creativity from music went into innovation and technology and I am all the greater for it.

Small Business Trends: How difficult is it for people to have all of their data at the device of their choice when they need it?

Amos Winbush: It is very difficult. Our main focus is to understand what the customer wants.  If an enterprise has employees with BlackBerrys, iPhones, and Windows mobile devices – and those devices do not communicate with each other – then that is the reason why CyberSynchs exists.

I think accessing the data is one thing.  Having complete ownership and manipulation of that data is another.  We’re all about having complete access to that data.  Meaning you are able to manipulate it, you are able to edit it, add it, delete it and it will also change in all of the devices that are associated with CyberSynchs and that particular piece of data.

Small Business Trends: How did you get started at such a young age? You said your parents were unhappy when you decided to move on from school.  But folks like Zuckerberg, Gates and Jobs did the same thing?

Amos Winbush: Yeah, but when you look at the landscape, at that time I was a 19 or 20-year old kid, with parents who grew up in the late 50’s early 60’s. Upward mobility for them was having a stable job and having a college degree that you can fall back on.

For me, it was being able to put the pieces together in the music industry.  I was able to bring that into launching a tech company.  Because it’s all about piecing things together at the right time and in the right place.

Small Business Trends: How were you able to get to where you are today without having access to the kind of technology role models that some of the folks I mentioned had?

Amos Winbush: I would be remiss if I said that it was not difficult.  It was very difficult. I remember going into this one conference in New York City and being the only African American in a room of 800 people.

When I first started CyberSynchs, I did not have those role models. I also did not have a major community of tech people that I grew up around. I did not go to a tech school, and I was not privy to having millions of VC dollars when I started this company.  So the doors just did not sling open for me. I had to work really hard and I decided to build my own road.  As difficult as it was, it was probably the smartest decision I had have ever made.

The first year and half to two years of CyberSynchs existence, it was very touch and go.  It was not all peaches and cream.

Small Business Trends: When was the moment you said, “You know what?  I think I am going to make it.”

Amos Winbush: I think when we signed our first partnership in late 2010 with a company in Central and South America that brought on board over a seven year period 118 million dollars into the business.  That was the first light that helped me to say, “I think we will be okay now.”

Small Business Trends: Where can people learn more about CyberSynchs and about Amos Winbush himself?

Small Business Trends: Can you tell us about the TV show you are going to be making an appearance on?

Amos Winbush: Well, I can’t say too much because I don’t know if ABC would like that.  But I took part in an amazing show where I go into a community and take on a different identity.  I work with amazing organizations that are changing the way that not only their community operates, their state operates, but the country operates. If not the world. The show is called Secret Millionaire and it airs on ABC.