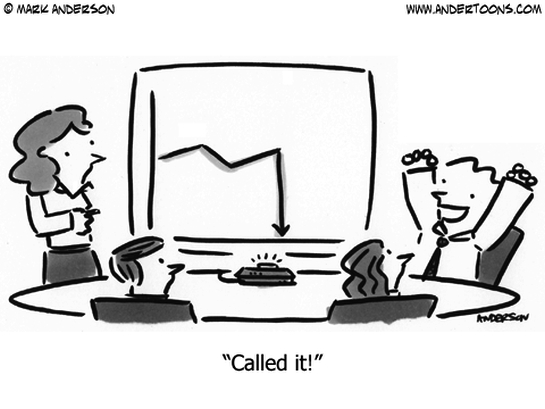 I keep my ear to the ground for words and phrases that I can play with. It’s like this little unconscious screen you filter everything you come in contact with through. Most of the time when something sticks I jot it down on a scrap of paper and then mine those later for ideas. Recently, I ran across one with “told you so” on it and set to work on coaxing out a cartoon.

There’s plenty of low hanging fruit to go with “told you so,” but the phrase has a certain smugness about it that wasn’t working for me. So I started playing with different ways to say it:

But the one that stuck was “called it!” and this arm-pumping guy came to mind almost immediately. I hope he enjoys his victory, because somehow I don’t think he’ll be working there much longer.