Mitt Romney recently outlined the important issues facing small business owners during a teleconference hosted by the National Federation of Independent Business (NFIB). The Republican nominee for President says what makes him optimistic about the country is the entrepreneurial spirit he sees as he campaigns across America: 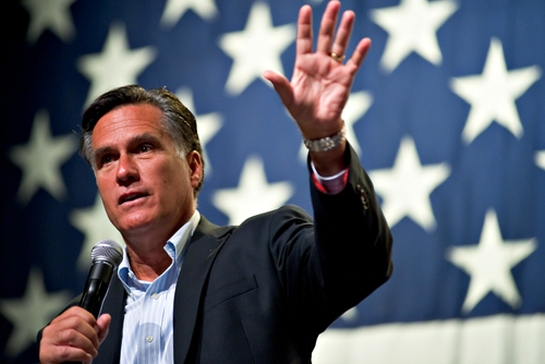 “What makes America’s economy go is individuals with dreams who take risks, borrow money from their family, max out their credit cards, maybe get an outside investor.  They have opened doors, invested in their businesses, seen return, and hired people. People taking risks create the jobs that put Americans to work.”

Romney believes that President Obama’s policies have created a “hostile environment” that made things harder for small business owners. Chief among Romney’s targets,  the stimulus package:

“The President borrowed about $1 trillion. It did not bring unemployment under 8 percent… It was designed to protected government jobs and union jobs, as opposed to encourage the private sector.”

The Presidential challenger also took aim at Obamacare, which he says:

“. . .has frightened more people from hiring more people than any other piece of legislation that I can recall.”

He vows to repeal whatever parts of the legislation that the Supreme Court upholds. Additionally, Romney has blasted government regulation and the “growing intrusion of federal regulators” during Mr. Obama’s first term.

For his part, President Obama has been touting his successes, including the impact that SBA lending has had on small business owners . Further, he has pushed Congressional leaders to approve legislation granting a 10 percent income tax credit to firms that create new jobs or that increase wages in 2012. The President also wants to extend a 2010 measure that enables firms to deduct the full value of investments made through 2012. Mr. Obama believes his plan to help business owners is superior to help small companies create jobs.

Meanwhile, the credit market remains tight for entrepreneurs in search of capital. The latest Biz2Credit Small Business Lending Index, a monthly an analysis of 1,000 loan applications, found that loan approvals by big banks dropped from 10.6% in April to 10.2% in May 2012, but was up slightly from the 9.8% approval rate one year ago. Additionally, small bank lending fell from 45.9% in April 2012 to 45.5% in May 2012, a figure that is still a half percentage point higher than the 45.0% reported in May 2011.

The May 2012 loan approval rate of credit unions increased to 57.6%, up 0.2% from April 2012 and up more than six percentage points higher than in May 2011. Alternate lenders also upped their lending to 63.2%, as a tight market for traditional funding is forcing small businesses to look for options such as factoring and merchant cash advance.

This is the third month in a row that big bank lending to small businesses dropped. Small banks decreased their lending approvals for a second straight month, as well. Combined with another poor jobs report, continued jitters in Europe and uncertainty on Wall Street, the economy looks like it is slowing.

Look for both Mitt Romney and President Obama to debate where the country is economically from now until Election Day.

One thing cannot be denied: lending for small businesses, which create the lion’s share of new jobs, has stalled.