Been Working My Way Up 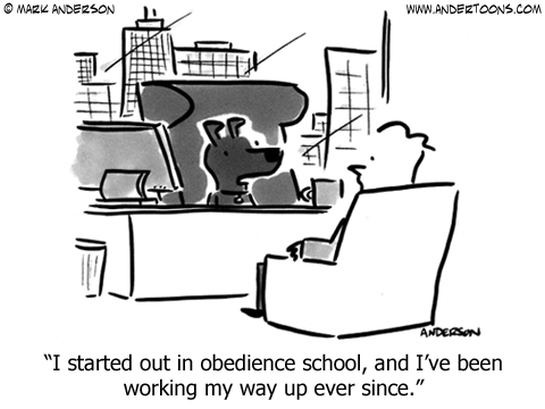 Normally, when I talk about a cartoon I explain where it came from, what inspired it, or what was happening when I thought of it. But for today’s cartoon, I’m going to point out a tiny but significant detail in the background that you probably didn’t even really see.

Look out the window behind the dog, see that city back there? It’s crucial.

First, it sets the scene in that the office you’re looking at is probably high up in another important building to secure that view. Secondly, the buildings are detailed just enough to be read as buildings instead of a stack of boxes or something else, but vague enough to be located pretty much anywhere. And lastly, the idea that you’re seeing the city outside the window suggests a successful executive’s office instead of a more mid-level employee’s office without a view.

And that all reads (hopefully) and influences the rest of the image in less than a second before you decode the dog, the other cast member, and the caption.

A few simple lines in the background can make all the difference between a good cartoon, and a great cartoon. And talking dogs never hurt either.