In any business relationship there exists the possibility for conflict. It’s like Yin and Yang – there’s good and there’s bad. 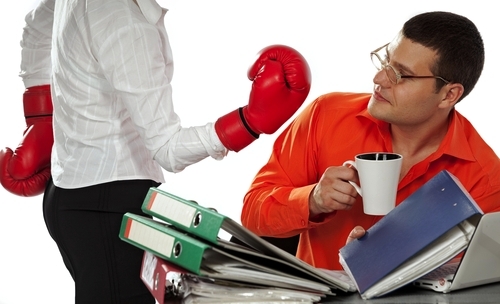 Many years ago I worked for a company where everyone knew the CEO was non-confrontational. There were people who took advantage of that. They knew he wasn’t going to say anything; he was just going to get mad. The interesting thing is that most people are non-confrontational. And those same people end up in conflict.

No matter what position you hold in a company, you run the risk of experiencing conflict. You may have a co-worker who you think isn’t carrying their load. You may have an employee who doesn’t seem to be working up to par. Maybe you have a vendor who isn’t delivering or a client who isn’t happy.

See, the potential for conflict is everywhere. I further submit that we set ourselves up for conflict. We believe it’s going to happen, so it does!

Let’s explore an example of how this happens:  let’s say you are working on a project and one member of the team isn’t meeting their obligation to the goal. You’re annoyed and frustrated. You want to say something but you are sure it’ll end up in a confrontation. You are sure the other person won’t take it well; they’ll get defensive.

So, you don’t say anything. Over time it continues and your frustration turns into anger. What happens next? You blow your stack. Voices are raised, tensions are high, and defenses are up. Now you really are in a conflict! You haven’t gotten your problem solved, have you? Actually, you now have two problems. Your fear of conflict has resulted in two conflicts when before there wasn’t even one.

So, what can you do to minimize the risk of conflict? Communicate clearly and consistently. When you want people to work with you, your job is to make sure you communicate well. Tell them the goal, your expectations, the consequences of meeting, and not meeting, those expectations, and your reasons for your decisions.

When people understand why a decision has been made they are more likely to follow it. It is those seemingly arbitrary decisions that cause trouble.

When you communicate all of these things upfront you are setting the stage. Follow that initial communication with continued, consistent communication about those things while adding in the progress. Don’t assume people know how things are going. Engaging in conversation is the best way to make sure everyone is on board. It’s also the best way to find out if someone is unsure of the direction or unwilling to play along.

Assume that the people on your team want to succeed, want to do a good job, and want to help you achieve your goals. Now help them succeed by making sure they not only know the goals but how they can help you meet them. Make sure they understand the expectations and consequences. Not all consequences are bad. When someone meets or exceed the expectation you have of them there should be a positive consequence that results.

If you’ve done all of these things and a disconnect arises that doesn’t mean there has to be a conflict. Quite frankly, the work you do up front creates a situation where no conflict need exists. If someone isn’t doing their part, there are steps you can implement to determine why and come to a resolution:

Step 1: Decide Your Desired Outcome
Before you deal with the situation, decide what you want the outcome of the conversation to be. This will help you frame how you are going to approach that conversation.

Step 2: Recap The Goal and Expecctations
It’s a good idea to start the conversation with a recap of what the expectations are. You are setting the stage for discussing what is actually happening.

Step 3: Recap What Is Happening
Make sure you explain what is and isn’t happening correctly and the impact that is having on meeting the goal. You are helping the other person understand how you see things and where they seem to have gone off track.

Step 4: Seek Input
You aren’t going to be able to solve it on your own. You need buy in from the other person. They have to participate in the conversation starting with explaining where they are coming from. This may require you to be silent (which can be tough). It makes a big difference so embrace that silence.

Once they have explained their point of view, work with them to come up with a resolution. When they take part in the problem solving you have a higher chance that the resolution will work. At the same time, if they don’t participate in this part they are indicating that they are not a viable member of the team.

No voices are raised, no tempers flare, no defenses are up. You are having a logical, structured conversation without emotion. The outcome will be right and best for your company whether it results in the person leaving or staying. The goal is to solve the problem. We’d all like the solution to include all the members of the team staying intact. However, sometimes the solution requires the exit of a team member or two.

Diane Helbig is a Professional Coach and the president of Seize This Day. Diane is a Contributing Editor on COSE Mindspring, a resource website for small business owners, as well as a member of the Top Sales World Experts Panel at Top Sales World.
3 Reactions
Subscribe
Follow @smallbiztrends
RSS LinkedIn Pinterest iTunes