Establishments Are Less Likely To Fail Than Firms

Since the mid-1980s, the number of U.S. business establishments has grown faster than the number of employer businesses, Census data shows. But this growth comes from higher odds of survival, not from higher rates of formation.

The Census Bureau defines a business as an:

“Organization consisting of one or more domestic establishments that were specified under common ownership or control.”

As establishment is “a single physical location where business is conducted or where services or industrial operations are performed.”  As Census explains, “the firm and the establishment are the same for single-establishment firms”, but differ for multi-establishment businesses. 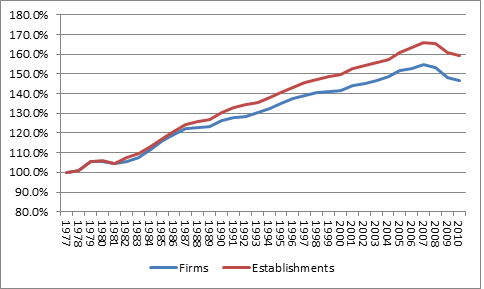 The twitter-length message for entrepreneurs here is that, over the past 25 years, individual outlets of multi-unit chains have become less vulnerable to failure than independent businesses.