Apple has just released the latest version of its operating system (OS), Mountain Lion, which includes a whole host of features that may be helpful for small businesses and entrepreneurs, including a system-wide sharing application, a new alerts system, and a gatekeeper platform for improved cyber-security. 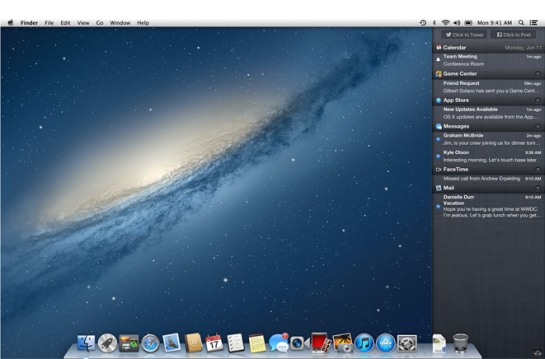 Mountain Lion includes changes to the Notification Center, which streamlines alerts from different programs like Mail, Calendar, Messages, and even third party apps. Having all alerts come from one notification center could have an impact on productivity, since users wouldn’t have notifications and distractions coming from several different programs at the same time.

Another time saver could be Mountain Lion’s system-wide Sharing application, which can make it easier for companies to share files and media content from one centralized platform. The system can also integrate with social media platforms like Facebook, Twitter, Flickr, and Vimeo, so companies that use social media marketing can make sharing easier and more streamlined.

Apple has also gotten rid of iChat in the new OS, and replaced it with a new Messages app, which people can use to communicate with anyone using an iPhone, iPad, or other mobile devices with iMessage. So companies that switch over to Mountain Lion can easily communicate with other employees, collaborators, and clients while they’re on the go, which could prove to be exceedingly helpful due to the large number of businesses that have begun using iPads and other mobile devices.

And finally, Apple’s new Gatekeeper platform aims to make downloading software from the internet safer, especially for companies that don’t have an excess of IT resources. Gatekeeper gives users more control over what apps are installed, and helps to protect users from installing malicious apps and other software from any sites on the web.

Though most businesses have stuck with Windows operating systems through the years, the new OS from Apple could at least be worth a second look. Mountain Lion includes over 200 new features, though many are smaller changes that some Mac users might not even notice.

The software update is currently available for $19.99 from the Mac App Store.